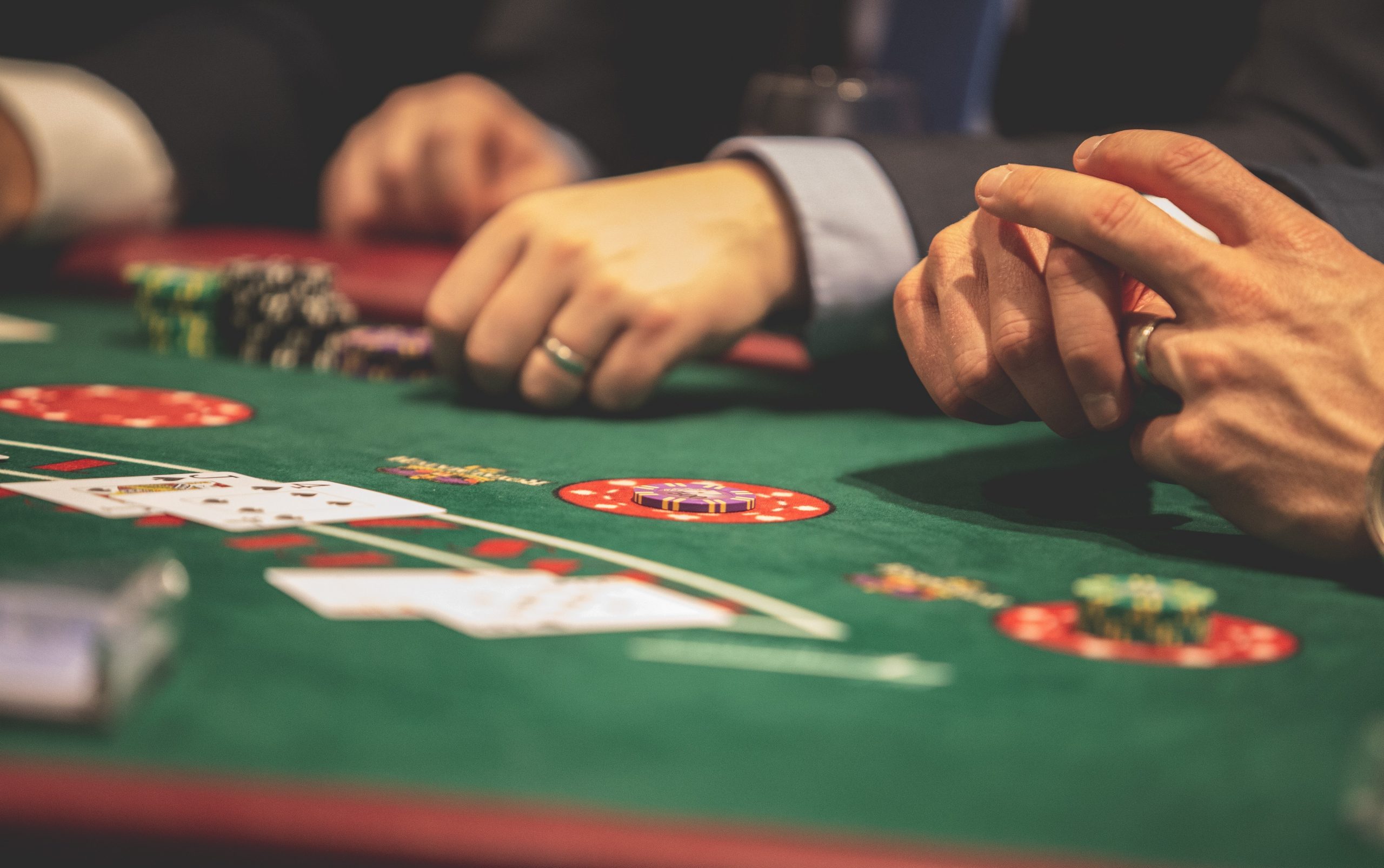 It is a very simple game, one that most people are familiar with, “Blackjack” or “21’en” in Dutch. The rules are easy to remember and are easily learned by children. Since there is a gambling element in Blackjack, the probabilities and expectations can be analyzed. Consequently, it is the perfect game to learn about risk and return, a term that is widely used by many investment managers. Moreover, Blackjack gives you insight into whether you are risk-averse or risk-seeking.

Players play against the dealer. The dealer sits at the opposite side of the table giving him a bird’s eye view over the table. Before any cards are dealt each player must place a bet in front of him. Next, the dealer deals two cards to each player and two to himself (one of the dealer’s cards is dealt face-up). Kings, queens, and jacks count as 10 points, ace counts either as 11 or one points and all other cards are counted according to their face value. Players can choose the value of the ace as they would like.

The aim of the game is to get more points than the dealer without exceeding 21 points. Exceeding this 21 point limit is called going “bust” and you will lose all your money. There is a possibility that a player can get an ace and a 10-count card on the first two cards. This is called “blackjack” or a natural. A winning natural pays the player 3 to 2. However, the dealer can also get 21 points in which case it is a tie (or a “push”) and you neither win nor lose any money.

When the first two cards are dealt, the dealer will ask each player clockwise around the table whether they want to “stand” or to “hit”. “Hit” means that you want another card and “stand” means that you do not want any more cards. A player could hit and go bust, in which case he will lose. However, there is no limit on how many cards a player is allowed to draw.

Next to these basic rules, the player also can make some other decisions. The first one is “doubling down”. This means that a player doubles his bet on the first two cards and draws only one additional card only. The second is called “splitting”. In this case, the first two cards of a player are a pair. If the player chooses to split his hand, the two cards are separated into two hands and the bet is spread equally amongst the two hands. So the player will continue to play with two distinct hands. However, there are some catches when the first two cards are split. If one of the cards is an ace, you are only allowed one additional card. Moreover, the combination of an ace and a 10-count card does not count as ‘blackjack ‘ but simply 21. At last, if the dealer’s face-up card is an ace, a player is allowed to take insurance, which means that your bet will be halved. If the dealer’s down card is a 10-count card, the player wins 2 to 1, but if it is any other card the dealer wins.

Sometimes it is also permitted to ‘surrender’, which means that you give up your first two cards and lose only half of your original bet. Depending on the casino you are playing, the dealer must always follow simple rules when it comes to hitting and standing. He must always draw on 16 points and stand on 17. Generally, the dealer will win in the long run. This is because the dealer has an advantage over the player, namely a player can go bust even if the dealer busts later. This is the key to the house’s edge. However, there are ways to exploit the player’s edge and create an optimal strategy.

The first key to winning in blackjack is knowing when you have to hit or stand. The first-ever published strategy for this was published by Ed Thorp in 1962 in his bestseller ‘beat the dealer’ which sold over 1 million copies. In his books, he provided tables like the one in the figure below. Thorp created this table by simulating thousands of blackjack hands and finding the best choice in every single possible situation. The letter “S” in the table means “stand”, “H” is ‘hit’, “D” is ‘double down’ and “SP” is ‘split’. From this table, one can observe that you should always stand if your card count is 17 or higher regardless of the dealer’s upcard unless you have a pair of aces or 8’s. In that case, you should always split your cards.

However, this strategy is not optimal without the second key. This strategy is infamous in most casinos and should be done in a discrete manner. It is called card counting and this is about keeping track of the type and percentage of cards in the deck during your time at the table. Obviously, in most casinos, they use multiple decks of cards to play blackjack to make card counting nearly impossible. However, when you play this at home with friends with one or two decks of cards, this strategy can easily be implemented.

When counting cards, you should not memorize where every single card in the deck is, but simply count how many 2’s to 6’s there are. The reason for this is that a deck of cards rich in low cards is good for the house (the dealer). Recall that the dealer should always hit when he has a card count of 16 or lower, so a deck of low cards will increase his probability of getting close to 21 without going bust. However, a deck rich in high cards, which are 10-count cards and aces, is good for the player. Consequently, card counting is about keeping track of the percentage of high cards and low cards. Moreover, if a deck favours the player, he should increase his bet, whereas, in a deck favouring the dealer, he should lower his bet.

A simple trick to card counting is to start with a fresh deck of cards and add one for every 10-count card or ace that is dealt and subtract one for every 2 to 6 count card. The larger this count, divided by the total estimate of cards left in the deck, the higher the probability of a player winning the game.

Now we have two key points in our optimal strategy to beat the dealer in blackjack. To put this into the perspective of asset choice and money management, we will now move on to the so-called Kelly criterion. It is a simple way of optimizing your bets or investment to maximize the long-term expected growth rate. So this idea is not constrained to blackjack but has multiple applications, especially in asset management. The Kelly criterion is the subject of money management, ergo how much money should you place on each bet. Staying on the concrete example of blackjack, suppose

is a random variable denoting the outcome of a bet. Moreover, assume that

is the mean and

is the standard deviation. In blackjack

can take on these discrete values:

. Suppose that we have an investment budget of 1000 euros. We bet a fraction

of these 1000 euros on each hand. Meaning that after

hands we have a total amount of:

So how should we choose this

? If we place large bets, in the long run, we will lose all our money even if the expected return is positive. However, if we place small bets then it will take a substantially long time to make a reasonable profit. To illustrate the difference, a plot is created with a small fraction

and a large one. As one could see, betting large fractions of your investments can lead to high returns but also has a high amount of risk. Besides, we are almost certain that we will lose in the long run. However, when betting a small fraction it can take a substantial amount of time to make a small profit. This is where the Kelly criterion comes into place. As we have to find a middle ground for the size of our bets, we must choose

The growth rate of our investments is given by:

We will assume that the outcome of each hand is independent (which is not strictly true for blackjack) and take the expected value while ignoring the scaling term:

which we will expand using the Mercator series:

For the sake of simplicity, we assume that the mean is very small but the standard deviation is not, we can approximate the expected long-term growth rate with:

This equation has to be maximized with respect to

. Simple calculus gives us that the optimal solution is,

which will give us an expected return of

per hand. In the figure below, the expected growth rate function is given for different values of

. The black dots in each function indicate the Kelly criterion for that scenario. Furthermore, when playing

hands we would expect a total growth of

All of this illustrates a possible way of choosing a portfolio. It can help you decide which asset to invest in and how much. However, the Kelly criterion maximizes expected long-term growth, whereas we could also maximize a risk-adjusted return or another measure to find the optimal portfolio for your own risk appetite. Different approaches to maximizing return will ultimately lead to different portfolios. This is also why it is important to know whether you are more of a risk-taker or a risk-averse person. At least you know how to beat the dealer at blackjack and how you could optimize your portfolio through these simple techniques.

← Previous: Impression of the Weekend Trip 2022 Next: Data collection is threatening our privacy →

Tornado Cash is a tool used on the blockchain. Specifically on the Ethereum blockchain and is known as a crypto mixer. Recently Tornado Cash has been in the news because it has been added to the Specially Designated National & Blocked Persons List (SDN). This...