Donald Duck and the magic wheel 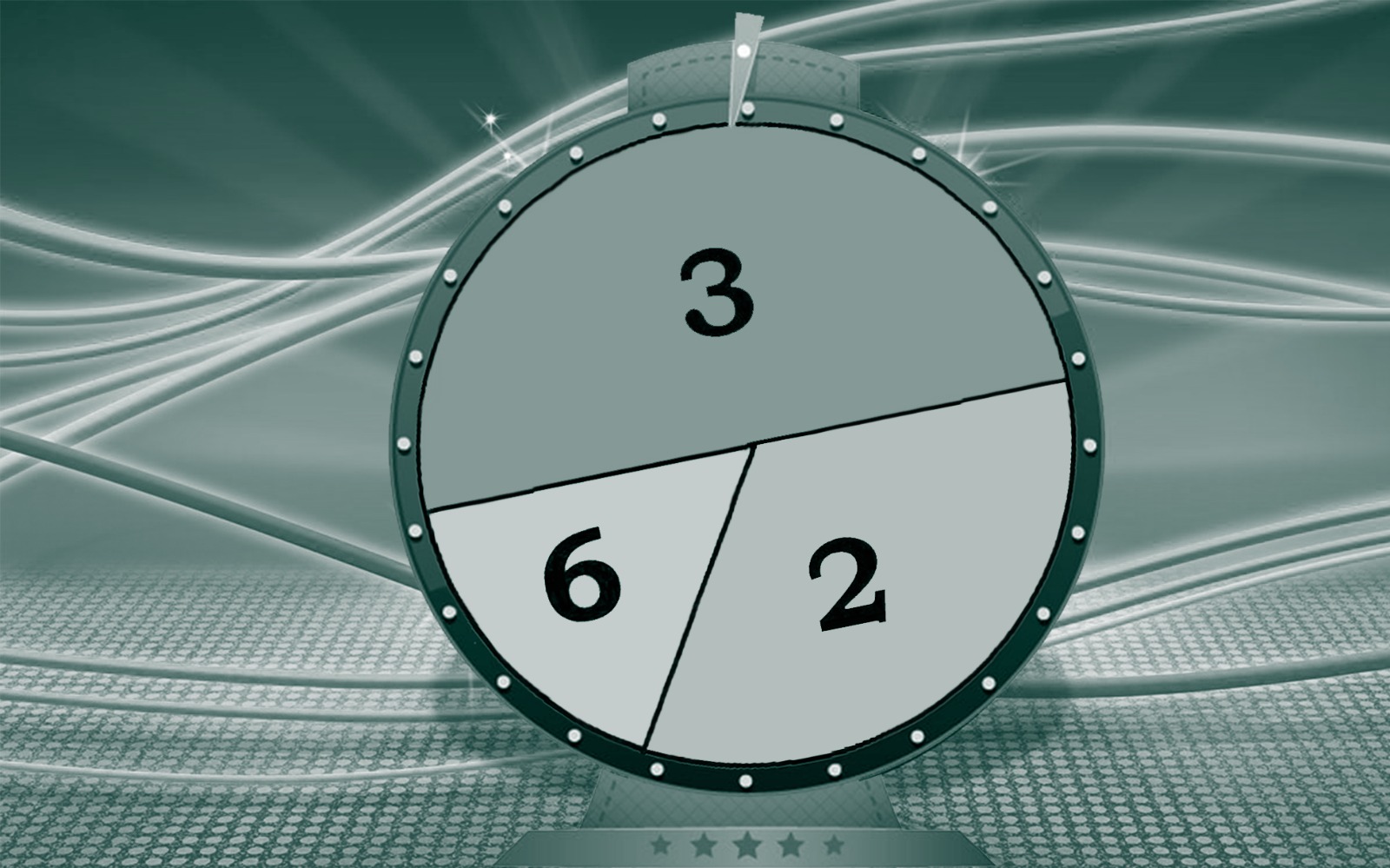 Donald Duck, the unfortunate duck that we all know and love, has had it. He angrily shouts at Scrooge McDuck: “every single day I’m brushing coins for you, and yet you barely pay me enough to buy food for my own nephews. I demand a raise!” Scrooge responds: “No way! A lazybones like you should be happy that I’m not firing you! But if you really want a shot at earning more money, you can have this magic wheel that I got from the prince of Farawayland as part of a trading deal. He told me it has great potential value, but I don’t want to have anything to do with this magic stuff. Now take this manual that came along with it and then leave, I’ve got business to do!”

Once kicked out of Scrooge’s money bin, Donald reads the manual. It says that each day you may spin the wheel, betting money on one of the three areas on it. The wheel lands on the upper, lower right or lower left corner with probabilities

respectively. The numbers indicate the amount you win if it lands on that section. For example, if the wheel lands on the upper half, you receive €3 for every €1 you invested on that sector. The probability of this event is one-half, so the expected gain here is the expected payoff minus your investment:

. With similar easy calculations, the payoff of the lower left corner is

, and of the lower right corner

Is this wheel a gift from heaven or from hell?
Only if you try it you will know
And perhaps if you manage your investments well
Your capital will grow!

The magic wheel, which gives €3 with probability p=

Puzzled, Donald Duck starts to think about what to do. His Duck account tells him that he has exactly €100 that he can maximally spend on the wheel. Based on the odds, it seems appropriate to focus on the top sector of the wheel. Maybe he should spend all his money on this sector? This yields the highest possible expected payoff of €50 on the very first spin. However, then he would go broke with a probability of a half, something his nephews never would forgive him. He decides this all-in strategy is too risky. Another possibility is to invest half of his capital on the upper sector. Then, starting with €100, for one spin there are two possibilities:
1) with probability one-half the wheel lands in the upper segment and he ends up with €50 + 3

€50 = €200
2) with probability one-half the wheel is unfavourable and he just keeps the €50 that he didn’t invest.
Hence, this strategy either doubles or halves his capital. On the long run this won’t get him any further! For a perfect strategy, Donald realizes that there’s only man in Duckburg who can help him with this magical wheel…

“Gyro, I need your help!” Donald shouts as he runs into the door of the small house of  Gyro [expand title = “Gearloose”] Willie Wortel in Dutch [/expand]. Without waiting for a response he starts explaining the whole situation, begging Gyro for help. Once he is finished, Gyro thinks for a while and then says:  “of course I’ll help you Donald. To derive the optimal strategy, we first need some background information, and that’s going to get a bit mathematical. But bear with me, it’s going to be of great help!”

“Your magical wheel is representative of a large and important class of investment situations, such as investment in common stocks, where a certain strategy leads to a random growth process. If

represents capital after the

is a random return variable we have

is a stationary independent process: all

‘s have identical probability distributions and are mutually independent. We need this to apply the law of large numbers later. [/expand] In our example, investing half of Donald’s capital on the upper segment corresponds to

, each with probability one-half.
If we repeat this process

Taking the logarithm on both sides:

terms to one side and dividing both sides by

If we take a large amount of periods, we can use the law of large [expand title = “numbers”] The law of large numbers states that, if random variables

, … are independent and identically distributed, then the sample mean converges to the true mean as the number of observations goes to infinity:

. For example, if you flip a coin many times, assigning

for tails, the average of

will tend to zero. [/expand] to state that as

, but we could have used any number, since the expected value is the same for all

This is something we can work with! This equation tells us that for large

the capital grows exponentially with

. So in order to maximize our capital at time

, we want to make

as large as possible. Maximizing

is equivalent to maximizing

plus a constant. Adding the constant

So there you go: for the special utility function

, the problem of maximizing growth rate

is equivalent to maximizing the expected utility

! For each period, we simply have to use the logarithm as a utility function. Thereby we can treat our multi-period problem (1) as if it were a single-period problem. Many important real-life problems can be solved by this technique!”

Donald, not in the mood for this mathematical gibberish, impatiently quakes: “that’s all very well Gyro, but I’ve got three nephews to feed. What does this have to do with the optimal strategy of my magic wheel?”
“Well, everything!” Gyro enthusiastically replies. “We can describe a general fixed-proportions [expand title = “strategy”] Fixed-proportions strategies prescribe proportions of your total capital to each sector of the wheel instead of prescribing, for example, fixed amounts of money. [/expand] as a set of three numbers (

. Here we have numbered the sectors 1, 2 and 3 corresponding to top, right and left respectively. The alphas correspond to the proportions bet on these different sectors. The remaining

is not invested. For example, the earlier mentioned strategy of investing one-half of your capital in the top segment every time is (

We now want to maximize the expected logarithm of these return, which we earlier defined as m: [expand title = “maximize”] Wonder where the these terms come from? Take for example the term after the first ln. In this scenario we land on the upper sector, so our return is

(what we started with)

(what we invested in the upper sector)

(what we invested in sector 2)

equal to zero. This gives 3 equations and 3 unknowns and hence we can solve the system of equations. If we additionally assume all alphas to be positive, the solution is

. Substituting this into our objective yields

Hence, this optimal solution will give you a growth rate of about 7%. This means that your capital of €100 is expected to be €1000 in only 35 days! There are a lot of other interesting things to say about this solution. Note for example that the optimal strategy requires investing in the unfavorable sector 2. This serves as a hedge for the other sectors: it the wheel doesn’t land om them, at least you get some payment. This is representative for how investors use portfolios of negatively correlated stocks to minimize their portfolio risk and … Hey Donald, where have you gone?!”
Donald had already run out of the door, taking the wheel with him. At home he immediately takes a spin. Perhaps the future will finally be more fortunate for him.

For the mathematical explanation why ln(x) = U(x) is an excellent candidate utility function for problems like the one described in this article, I was inspired by the book Investment Science by David G. Luenberger

← Previous: Embrace the spook Next: Is it mathematically possible for Trump to win the US election? →

Some people just die too soon. One such person was Evangelista Torricelli, an Italian mathematician who died at the age of 39 in the year of 1647. Had Torricelli lived longer, he just might have discovered calculus, before Sir Isaac Newton and Gottfried Leibniz....

What is two plus two? The realist will say four, the computer will say 100, and the cynic will say 5 – but which is correct? The reason we count in base 10 stems from the simplest fact: humans have 10 fingers. Understandable and logical, as this seems to be nature’s...