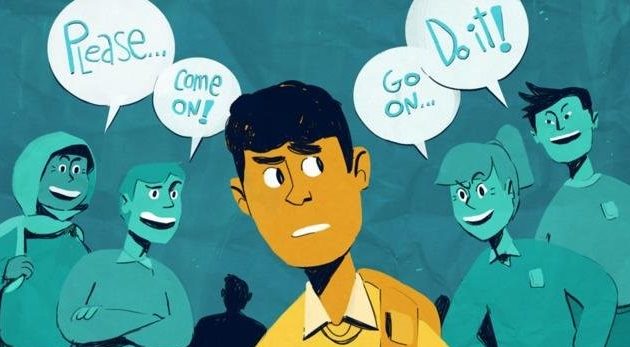 In the past few weeks, our supermarkets have been swamped by a huge demand for durable goods. This is due to the quarantine measures our government has taken to prevent the spread of the coronavirus. However, despite the notion of our prime minister to discourage buying every single roll of toilet paper, people still continued hoarding these goods. This behaviour is very typical in crisis situations and experiments have been conducted to explain the psychology behind peer pressure.

A pioneer of social psychology Solomon Asch introduced fundamental concepts in conformity and many other topics in social psychology. He is best known for his experiments in which he demonstrated the influence of group pressure on opinions of individuals. A citation from Asch:

“Most social acts have to be understood in their setting and lose meaning if isolated. No error in thinking about social facts is more serious than the failure to see their place and function” (Asch, 1952, p. 61).

He is most famous for his conformity experiments, in which he asks to what extent social forces can influence people’s opinions and how many people are needed to influence one individual. One of those experiments consisted of 123 male participants and 5 to 7 so-called confederates. These confederates are pretending to be “real” participants, but they know the true aim of the experiment. Each subject is put in a group of these confederates. They were shown these two cards:

So, the “real” participant had a choice to just go with the group or stick to their senses. The results of this experiment were that one out of four participants could withstand this kind of peer pressure, whereas one out of twenty completely succumbs. The remaining part of the participants only gave in to the incorrect answer in a few of the trials. Asch also found out that when just one confederate would not give the incorrect answer, the power to influence the subject was decreased substantially.

Another conformity experiment, conducted by a television series on National Geographic called “Brain Games”, looked into how a crowd sitting in a lecture room would react to a lecturer when he talked absolute nonsense. The lecturer would first talk about actual topics that made sense and near the end of his lecture he would talk complete nonsense. Again, like the Asch conformity experiment, the crowd consisted of a few confederates and actual participants. The confederates would sit through the whole lecture, look interested and most importantly give a standing ovation at the end of the talk. The aim of the experiment was to find out whether the participants would do the same and give a standing ovation.

As we may expect by now, because a few confederates all gave a standing ovation at the end of the lecture, everyone else also gave a standing ovation. This behaviour is very similar to that in the experiment conducted by Solomon Asch. It shows that our brains are programmed to follow what the group does. This is due to a survival instinct that has been cultured in our brains for centuries. Just like animals, staying with the herd will increase your chances of survival.

Let us come back to the motivation of this article: why do so many people buy every single roll of toilet paper that is left on the shelf? In crisis situations like the quarantine measures we have now, people tend to go to extremes. Whether it is completely isolating yourself in a bunker or hoarding food, it is all due to a basic survival instinct we all have. This holds more for some than others, as the experiment of Asch showed that not every single person is succumbed by peer pressure. However, when a few people start stockpiling on a certain good many people will follow. Then other people might be afraid of not getting any toilet paper in their homes they also start hoarding for more.

The only way to prevent this kind of behaviour is to take preventive actions. Luckily, a few supermarkets already established some rules on the amount a customer is allowed to buy. This will be the only way to stop people from hoarding all kinds of products. So, next time you go shopping for goods, think about whether you can resist this social influence. In Asch’s words, which line would you have picked?