Why the Dutch government bought stocks in Air France-KLM 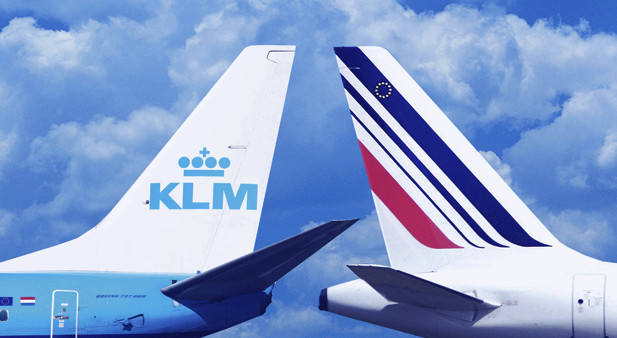 The primary reason for this is the fact that Air France is not doing so well. If we look at the numbers we see that Air France’s profit is much lower than KLM’s. Even though Air France has twice as much revenue as KLM, their profit margins are much lower. This is mainly because Air France is not as efficient as KLM. When we look at the salaries of Air France pilots, we see that they pay 200.000 euros a year on average per pilot. To put this into perspective, KLM only pays 175.000 euros per year per pilot. Besides, Air France had to endure a lot of strikes from their personnel because they want higher wages, which costs Air France hundreds of millions of euros. When we look at the cash flow statements of both companies, we can clearly see that KLM makes a lot more investments than Air France. The French airline is spending a lot of money repaying debts over the last few years, whereas KLM is increasing their capital. According to the CEO of KLM Pieter Elbers, KLM made 1.3 billion euros worth of investment in 2018, which led to a higher demand for customers to fly with KLM. 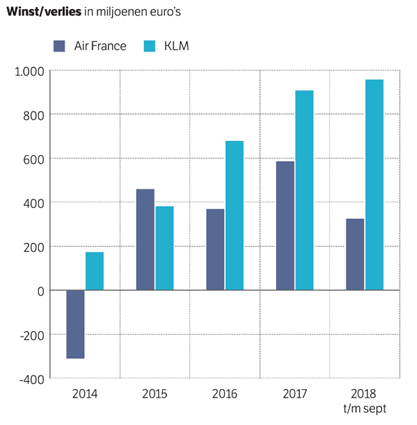 Since KLM is doing so well, the government is afraid that the French airline will use KLM to cover up their losses. Because of this, the Dutch government wants to protect KLM from contributing too much to Air France to help them recover. This will cost KLM a lot of money that can lead to total dependence on the French. The Dutch do not want this, since KLM is a very important company for the Dutch economy. If KLM is dependent on Air France the French will have more control over the company. This will cost the Dutch economy a lot of money because they would have to move a part of their operations to Paris.
To try to sustain and have some influence in the company, the Dutch government also have some shares in KLM itself. The Dutch airline was merged with Air France in 2003, when the government and the company did not see good prospects for the future. Since then, KLM grew a lot and can almost stand on its own. The problem with the latter is that Air France cannot be an independent company at the moment. It does not make high enough profit margins compared to KLM and they will probably lose the trust of their shareholders when the Dutch airline is no longer part of the company. Air France basically needs KLM to sustain a long future. Hence this is also of interest to the French, since it is of great significance for their economy too. Consequently, the French have already bought shares in Air France-KLM to exert some influence. The Netherlands have a somewhat similar interest. However, the difference is that KLM is doing well whereas Air France is not. The Dutch government is afraid that Air France will exploit KLM such that they cannot be an independent company anymore.

If we look at the shareholders of Air France-KLM, we see that the French have 14 percent of the shares and the Dutch have none. This is another reason why the Dutch bought the shares, since they want to have an equal amount of saying in the company as the French. However, when the Dutch bought the shares, the share price plummeted causing a loss of almost 100 million euros. Apparently, the news was not received very well by shareholders. This is partly because investors now have a little less to say in the company, but they also see it as a battle between two governments. It caused the shareholders to lose trust in the company. However, if we look at the total amount of shares that the French and the Dutch now have, we see that it is a little less than 30 percent. This is never enough to have a majority, but both countries are planning to buy even more shares. The French responded immediately by threatening to buy more shares. 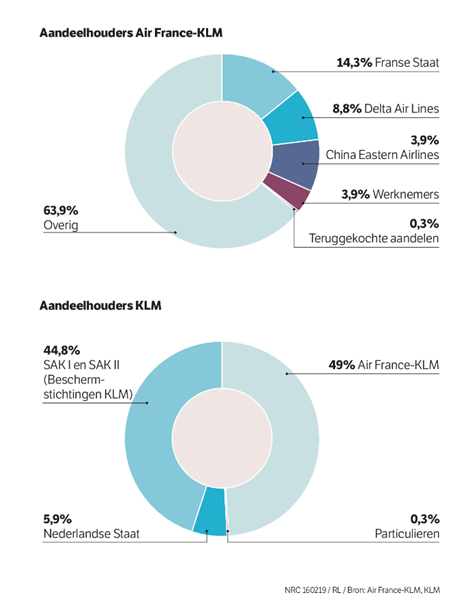 Since the merge of the two companies, Paris called the shots. This is something that the Dutch government did not bother at first, but since Schiphol grew exponentially the last couple of years, the Dutch government wants to be more involved in the matter. This is not the only reason why the government wants to be more involved. Recently, a petition was signed by 25.000 employees of KLM to ensure that their CEO Pieter Elbers would stay. The CEO of Air France-KLM Ben Smith did not want to confirm to renew Elbers’ contract, but was reconfirmed after the petition. This happens a lot within the company because KLM made a clear agreement with their personnel and Air France could not. So there is not only a lot of tension within the two companies but also with the countries that are involved.  This has to do with the cultural differences the two countries have. The Dutch think that the French are too disrespectful and the French think that the Dutch are too arrogant and selfish. This is mainly the reason that causes the tension with employees and CEO’s of Air France-KLM.

Since KLM is based in Schiphol, the Dutch government is worried that they have to move a part of the fleet to Paris. Schiphol is responsible for more than 100 thousand jobs and contributes around 9 billion euros to the Dutch economy. It is no wonder that the Dutch government is showing interest in this company. However, is it a good idea to suddenly invest this much money in a company that is carried by KLM?
As mentioned before, the French and the Dutch have a little less than 30 percent saying in the airline. This will never have a majority, since there are also other airlines that have invested in Air France-KLM like Delta and China Airlines. Hence the Dutch could never stop strategic decisions and every party has different interests. Nevertheless, the Dutch government can try to appoint Dutch people in the Supervisory Board of Air France-KLM. Having people who represent Dutch interests, the Netherlands can have some influence in the company. Since this board elects the CEO and controls the general business of the company. This is also why the French are not so keen on the fact that they bought an equal amount of shares. They say that it was not smart what the Dutch did, because it caused a lot of damage to shareholders. However, the Dutch care more about the sustainability of KLM and their influence in Air France-KLM. 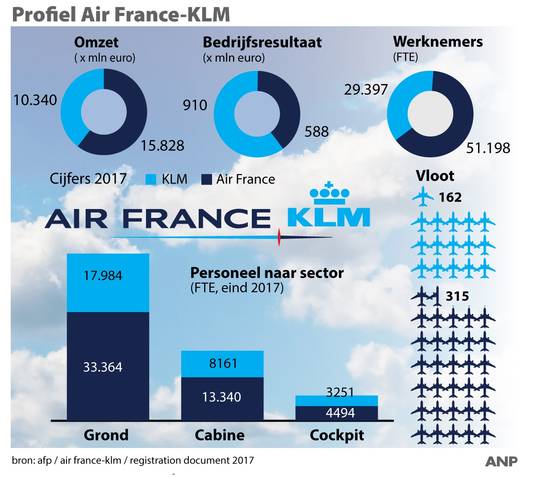 If we look at the infographic above, we can see that Air France is a much bigger company than KLM. They have more personnel, a bigger fleet and more revenue. The reason why KLM could be more successful is the fact that they also travel with the name of Air France. This makes sure that KLM reaches more people and split the costs. Then we could say that KLM actually also needs Air France to be this successful otherwise it will lose destinations and jobs. Besides, since Air France has a much bigger fleet, they obviously have more costs concerning maintenance and fuel. They also have a lot more personnel which will also result in an increase in costs. As mentioned before, the personnel of Air France held strikes because of low wages. Moreover, Air France also pays their personnel much more than KLM. It seems to be that Air France has a bad reputation concerning their labor relations. If they could resolve these problems then they could be as successful as KLM, but this of course is easier said than done.

In conclusion, it is pretty clear why the Dutch wanted to buy stocks in Air France-KLM. It is one of the most important economies for the Netherlands, they are afraid that KLM has to cover up a lot of costs Air France is making and they want to have an equal amount of influence as the French. The only question that rises up is whether it was a smart move of the Netherlands, since the share price plunged with almost 12 percent by the time the news came out. According to the French, they see it as an attack and are also worried about the stockholders. This of course makes makes sense, since they see this as an extra competitor within the company. Besides, both governments do not want this to become a clash between the two countries because that would be bad for both economies. All in all, we have to wait and see what will happen with Air France-KLM. At the moment the shareholders are not very glad as we can see from the share price. So there are two options: will the holding remain as one group or will they separate and continue as two independent airlines?