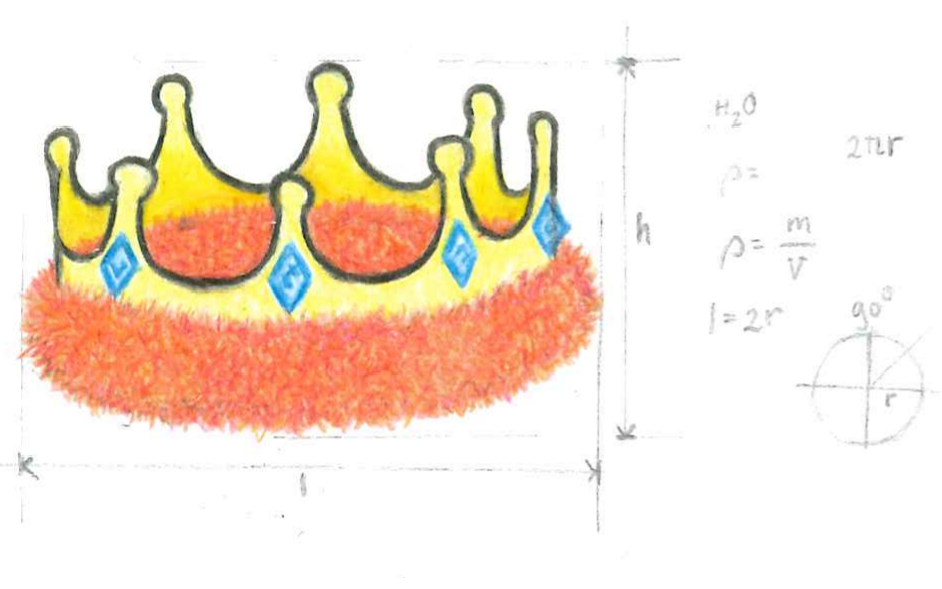 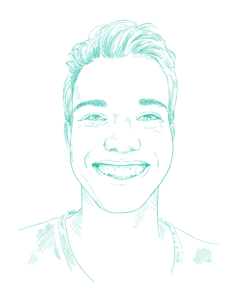 Archimedes of Syracuse (287-212 BC) was a Greek physicist and mathematician best known for a very famous and amusing anecdote: the king of Syracuse had a golden crown made by a blacksmith. He distrusted the blacksmith and suspected him of not having used pure gold for the crown, but having mixed silver in. He had no method of finding out, however. He decided to give the crown to Archimedes to let him devise a solution to the problem. Later, Archimedes, while stepping into a bath, noticed that the water level rose exactly by his body volume. He immediately tested the water displacement by the crown to determine its volume, which he could then divide by its weight to obtain its density. According to the story, after finding out that the density of the crown was too low to be of pure gold, Archimedes yelled “Eureka!” and immediately ran, still naked, to the king of Syracuse to report his findings.
One of the many other things Archimedes has worked on is an approximation of π, the ratio of the circumference of a circle to its diameter (approximately 3.141592654). π, as we now know, is an irrational number, meaning that it is an unending, never repeating decimal and therefore not a fraction of two integers. Many approximations of π have been given in the past. A quote from the Hebrew Bible talking about Solomon’s temple: “…a molten sea, ten cubits from the one brim to the other: it was round all about, … a line of thirty cubits did compass it round about” suggests that π is equal to 3. In this article, we are going to work on an approximation of π in the spirit of Archimedes. Let’s see if we can do better than the Hebrew Bible! 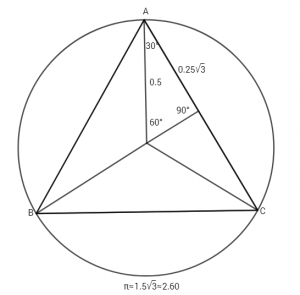 We take the diameter of the circle to be 1, meaning that the radius is 0.5. We draw bissectrices from the corners to the centre of the circle, with one bissectrice extending to another side of the triangle, creating a 90° angle. As all angles of an equilateral triangle are 60°, the bissectrice cuts it into a 30° angle. Now we have a 30°-60°-90° triangle, of which the sides are in a 1-√3-2 ratio. Hence, the part belonging to the triangle circumference has length 0.25√3, and that multiplied by 6 gives circumference=1.5√3. As the diameter is 1, the ratio is also equal to 1.5√3, or approximately 2.60. 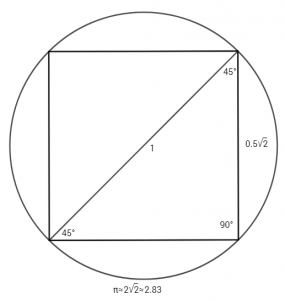 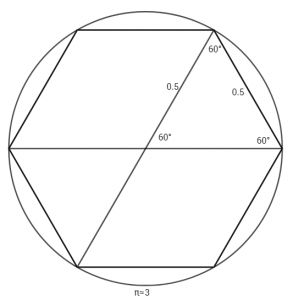 As all angles of a hexagon are 120°, bisecting them gives angles of 60°. Now we have an equilateral triangle, of which the sides all have the same length. Letting the diameter of the circle be 1, we have that the radius and the sides of the hexagon are all equal to 0.5. Multiplying this by 6 gives circumference=3. As the diameter is 1, the ratio to approximate π is also equal to 3.

By using a hexagon, we are already doing as good as the Hebrew Bible. But we can get much closer to π by finding the approximation of π by a general n-sided polygon and taking a very large number for n. 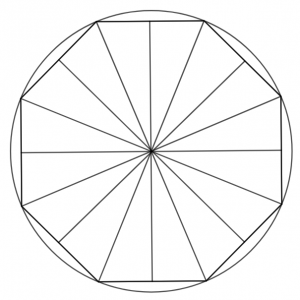 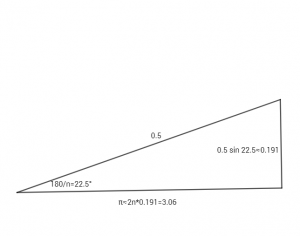 I have computed a table for some values of n. Note that we correctly worked out the approximation of π for n=3,4,6: 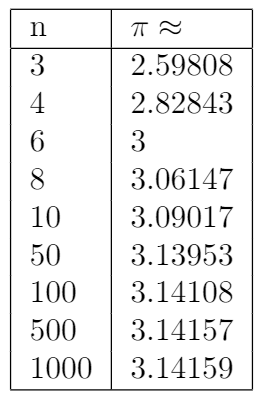 , accurate to two decimal places.
Nowadays, computers have estimated π to over 20 trillion digits. We still use algorithms such as the circumference of an n-sided polygon sequence, but now we have much faster converging sequences such as

This article is written by Balder Stalmeier.

← Previous: Wiskunde in de kunst Next: How can we make legal cases go faster? →