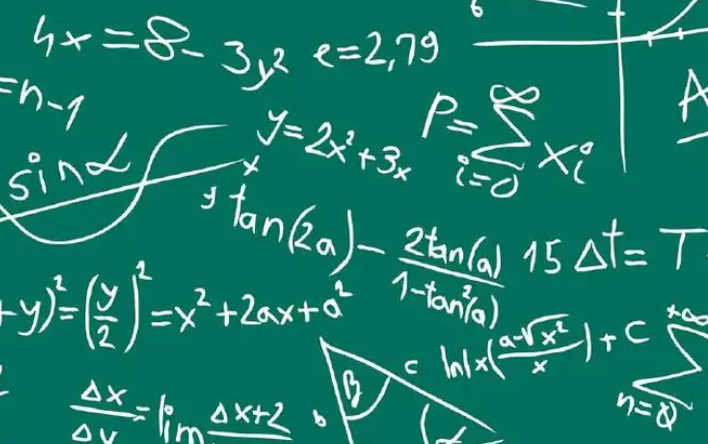 Pythagoras of Samos (572-500 BC) was one of the first famous mathematicians. He is probably best known for the Pythagorean theorem, even though he left no mathematical writings himself. Much of what we now know of Pythagoras comes from the writings left by his followers.  These followers, the Pythagorean, were not just common scholars, for them Pythagoras was a spiritual leader. The foremost axiom of Pythagoras’s school was “All is number” or “God is Number”. The Pythagorean thought was based on the idea that numbers are the underlying substance of reality and Pythagoras taught his followers that the world was controlled by mathematical harmonies that made up every part of the universe. Even though the Pythagorean thought became more a cult than a science, it’s worth looking at how mathematics is an indispensable part of the world and how it is truly all around us.

This pattern holds for every x. From one perspective we look at the value as a sum of x, the other perspective looks at x as part of a multiplication. Antonsen believes every equation is actually an analogy between two things. Patterns like these are everywhere. Once found, they are not only interesting, but very useful as well. Take a look at the following examples:

All these patterns represent the same thing, the same reality. We are just viewing “De Econometrist” from different perspectives. The former is written in braille, a writing system developed for the visually impaired. The latter is “De Econometrist” written in morse code, a system that encodes text characters as an arrangement of dots and dashes. Numbers are just as easy found anywhere around us.

For the those of us who are not familiar with binary code, the numbers above represent the number ¼. It is not usual to depict regular numbers in binary code. Binary numbers  are mainly used in information theory or computer technology, where its importance derives mainly from the reliable manner in which 0’s and 1’s can be represented in electromechanical devices with two states, such as “on-off”, or “go–no go.” 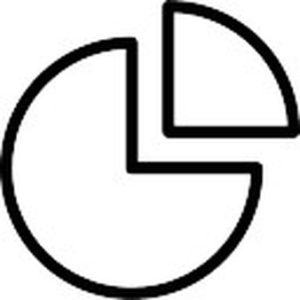 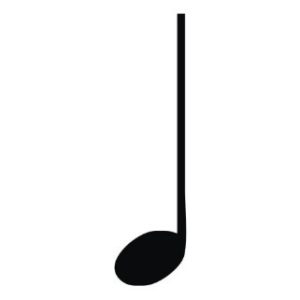 The above note is the quarter note or a crotchet, representing ¼ in yet another language. In music, notes can have many different note values, one example is the crotchet, but there exists a half note as well, an eighth note, et cetera. The theory of music has many other roots in mathematics. Pythagoras gave as one of the first exact scientists much insight in the pitch space. He said that every musical pitch was built out of sheer sine waves. He discovered that the natural intervals coincide with simple ratios of the corresponding vibrations. He found the numerical relations of musical intervals, 3/2 for the quint and 2/1 for an octave. In this way, all thirteen intervals correspond to their own ratio.
Another example is are “pitch class sets”, a theory described by Alan Forte. A pitch class is a number between zero and eleven and is the representation of a pitch. If zero were to refer to the note C, pitch class two would refer to note D. Between two consecutive notes there is always a so-called semitone, a half step, the smallest musical interval. The series of notes (C,D♭,G,A) is represented as the pitch class set (0, 1, 7, 9). While a graphical representation of (C,D♭,G,A) is as follows:

This set can also be transposed over an interval, for example a major third, which coincides with the addition of 4 semitones. Hence the pitch class set (0, 1, 7, 9) transforms into (4, 5, 11, 1). We see mathematics lays a foundation even in arts.

The visualization of patterns

Sometimes mathematics is more clear when visualized. In simple acts like tying our shoelaces or cooking dinner, we can find patterns and numerical relations like ratios. Shuffling a deck of cards can be seen as a permutation of the cards. A different perspective towards a shuffle could therefore be given by a permutation matrix. A more graphical approach can be taken as well. Take for example the “milk shuffle”, a shuffle where you repeatedly pinch the deck and pull off the top and the bottom card into a separate pile until all the cards have been pulled of (milking the deck). Once this shuffle is repeated with different sets of cards the visualization looks as follows 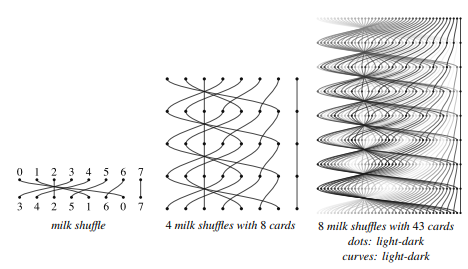 The visualization and arrangement of the effect of a shuffle are different mathematical languages we can create, all by finding the patterns they represent.


The effect of patterns

Patterns are not only detectable in our actions and our writings. It can influence the way we think and what we believe to be true. How we obtain knowledge and how we process it, is coherent with probabilities and statistics. When we see patterns in our day-to-day life, we add them up and based on these outcomes we’ll make predictions. “The train left the station at exactly 8 am on Monday, Tuesday and Wednesday, so the train will probably leave the station at exactly 8 am on Thursday as well.”  It is the same for scientific theories, we can assign probabilities to hypotheses that measure the extent to which we should believe them to be true. An example was the Bayesian program. Scientific theories were acknowledged different probabilities. After evaluation and the collection of observations, probabilities where changed in accordance with Bayes’ theorem.

A famous example can show how this works. In 1818, the French Academy of Science held a competition about the nature of light. Augustin Fresnel submitted an essay presenting and defending the wave theory of light. When evaluated, a mathematician recognized that for Fresnel’s theory to be true, there would have to be a bright sport at the center of the shadow cast by a small circular disk. Even though the existence of such a phenomenon seemed highly improbable, the judges began their observations and it turned out they did indeed discover a small bright spot at the center of the shadow. Since the probability of this phenomenon was nihil unless Fresnel’s theory was correct, the probability that Fresnel’s theory was true increased dramatically, given the existence of this bright spot. Hence probabilities and patterns found in nature play a large role in what we believe.

When we look at things from different points of view, this sometimes requires imagination. Roger Antonsen describes imagination as a requirement for changing your perspective. When you use your imagination to look at things from another angle, you are viewing yourself from the outside. Changing our perspective is something we do every day, not only in the ways as described above, but in taking a different perspective in relation to others. When we truly understand something from another’s point of view, we call it empathy. According to Antonsen, mathematics and empathy are closely related, in the sense that we can only understand something truly if we have the ability to change our perspective. Hence we should learn from mathematicians and computer scientists, it’s helpful to change your perspective once in a while!