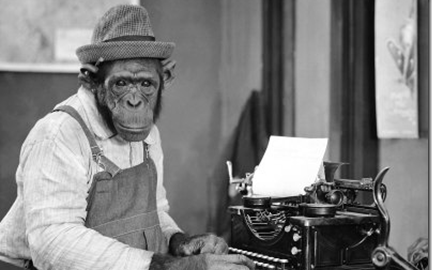 This means that as

goes to infinity the probability that the event

is not equal to

happens with probability 0. To get a better feel for this we consider the following example. We start by tossing a fair coin. If the coin lands heads up then

, but if the coin lands tails up we have

.  After this we toss the coin again. If the coin lands heads up then

, but if the coin lands tails up we have

. We repeat this process by first tossing a coin and then assigning a value to

, this is deterministic. As

goes to infinity we have that

goes to 0. Hence we can conclude that

A problem involving the digits of pi

We will start by looking at a problem similar to the Infinite Monkey Paradox. Consider any integer. Then, it is believed that that integer will appear in the digits of

with probability 1. This, however, has not been proven yet. To prove this statement one will need to prove the normality of

. That is, all numbers 0 through 9 will appear infinitely many times in the digits of

and are distributed uniformly.

Let us assume that

is normal. Then take the integer 123 as an example. If we are ignorant and do not know what

looks like, but only that it is normal, we start at a point in the digits of

blocks of 3 digits is

has infinitely many digits this probability goes to 0 as

goes to 1. Since 123 was just an arbitrary example one can show that this holds for any finite pattern of numbers. The only thing that remains is to prove that

is normal, which is a very difficult task.

The Monkey and the Typewriter

The Infinite Monkey Paradox is very similar to the problem described above. Consider a monkey behind a typewriter. This monkey hits one of the keys at random. Assume that the monkey has an equal probability to hit each of the keys. Now we let the monkey press keys in an infinite amount of time to create a sequence of symbols. Then the Infinite Monkey Paradox states that the monkey will type any given text almost surely. An example of this is the article that you are reading right now. This seems impossible at first, but is correct according to our notion of infinity.

← Previous: "If you want to grow in your career, you should join Northpool" Next: Impression of the Weekend Trip 2022 →