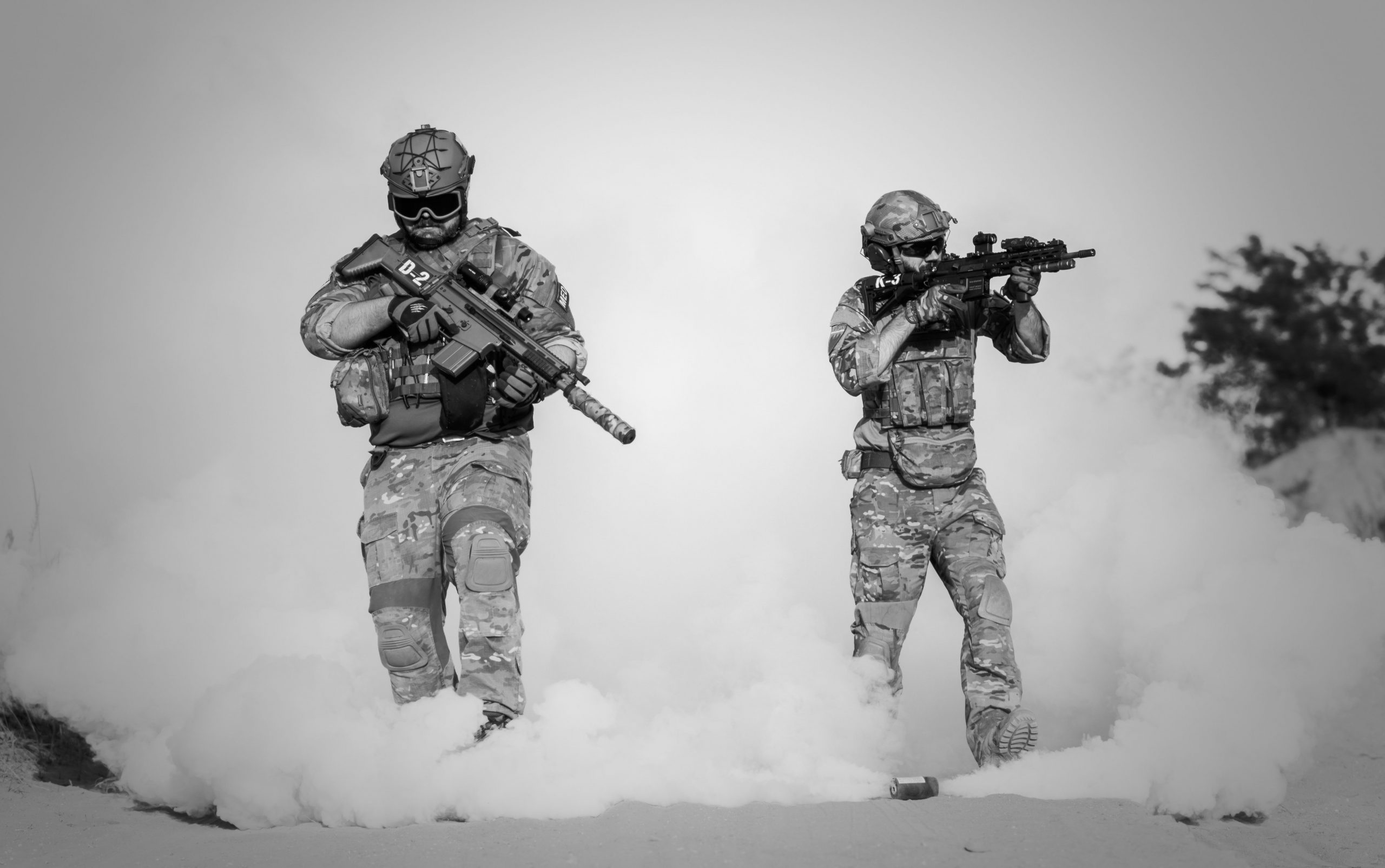 The decisions you make as an individual, the type of products you buy, the route you take to work, or even the amount of hours spent studying, are part of your behavior. Some of these decisions are conscious choices, other decisions are made without any thought. Human behavior has long been the subject of many studies, and even though your decisions may feel like your own, scientists have found many patterns in the actions of people. This way, they are able to predict human behavior. And it turns out that the simple choices you make during your day are actually influenced by the choices of others and are less your own than you initially might have thought.
The mathematical patterns in human behavior do not just apply to simple day-to-day choices but are actually very relevant to global events. Multiple mathematicians, physicists and data analysts have ventured to study the mathematics behind one of the most violent phenomena of human behavior: war. Wars might seem like series of random events, but what researchers found was quite striking. Even wars tend to follow certain trends, regardless of the motives or ideologies that might have caused the conflict.
Data researchers Jean-Baptiste Michel and Steven Pinker have studied the magnitude of wars that happened over the last two centuries. The relationship between the number of casualties of war and the occurrence of war has a certain consistency.  It turns out that the number of wars that are hundred times deadlier is ten times smaller. This means that, for every war with a magnitude like World War II, ten smaller wars will have occurred with hundred times fewer casualties. But is there a mathematical explanation? The cause of this phenomenon actually lies in our brains, in the way we perceive quantities. If you compare the number hundred with the number one, it might seem like a lot, but when comparing it with the number thousand, hundred suddenly seems a lot smaller. The same goes for the amount of soldiers sent to battle. Thousand extra soldiers is an enormous amount if the first troop consisted of a hundred soldiers. But if initially ten thousand soldiers were sent to battle, a second troup with only a thousand extra soldiers might not even make any difference. The effect of the relative way in which we interpret quantities, is that one decision to send out an above average number of soldiers, usually leads to more and more soldiers being send to battle. This results in the number of soldiers and the number of casualties not growing linearly, but exponentially.
A more elaborate way to look at the sizes and occurrence of war is to look at the inter-event time of two consecutive violent conflicts. A team of scientists studied the estimated number of deaths (s) of events occurring at time (t). They based their analysis on the violent conflicts in Iraq (2003-2005), Afghanistan (2008-2010) and Northern Ireland (1969-2001). Inter-event time () is defined as the time interval between the beginnings of two successive events, shown in figure 1.d. Note the logarithmic scale which indicates exponential size differences. 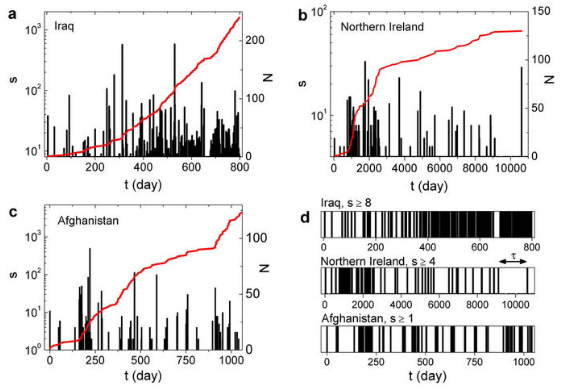 So far, this has all been somewhat abstract. Quite recently a study found a more practical pattern in modern warfare, one simple equation which lies at the fundamentals of each war. Scientists collected data from all over the world and started looking at the distribution of the sizes of attacks in different countries, with a pretty surprising outcome. 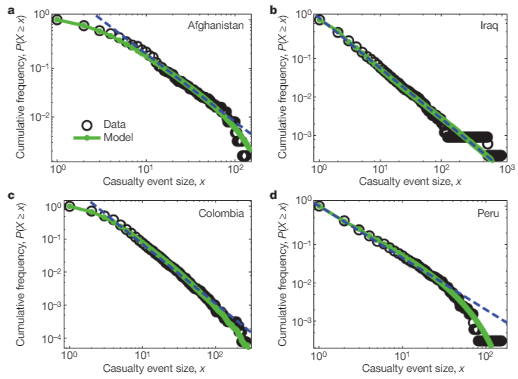 With P the probability of the event, x the number of people killed, C a constant, and α  the slope. This equation plotted on a logarithmic scale results in the straight line distributions from figure 3. Taking a closer look at the equation gives another insight in the patterns behind warfare. Alpha (α) does not only represent the slope of the equation, but also stands for the organizational structure of the insurgency, or in other words, the distribution of the group’s strength. When alpha has value 2,5, it’s stable. Meaning that a conflict will continue. So what happens if the value of alpha changes? An increase in alpha implies that the insurgent groups become more fragmented, they grow in numbers, but they crumble into separate groups. A decrease in alpha means the opposite occurs: coalescence, forces become more united. This might open the door for a cease-fire and conversation instead.
Many other mathematical patterns can be found in the occurrence and sizes of violent conflicts. They can be obtained from data all around us. Sean Gourley and his team collected all the information they needed for the distribution of attacks from 130 different open sources, from NGO reports to newspapers. Mathematical patterns do not only give information on the structure and similarities of wars, but they can also be used as a foundation for methods to end these conflicts.  For instance, the government can focus on operations with as goal to push the alpha of a certain insurgent group upwards or downwards, with as a result a fragmentation in the opposing forces which might weaken them. Or the other way around, the forces become more robust but also smaller in numbers, which might make them more sensitive to a cease-fire. The structures and trends we find in modern-day conflicts should serve as footing for proper military strategies. When we understand wars and their structure, we can understand and determine their resolution. Because sometimes, numbers should be valued more than muscle.

← Previous: The VESTING International Programme is going to Beijing! Next: Impression of the Active Members Weekend →