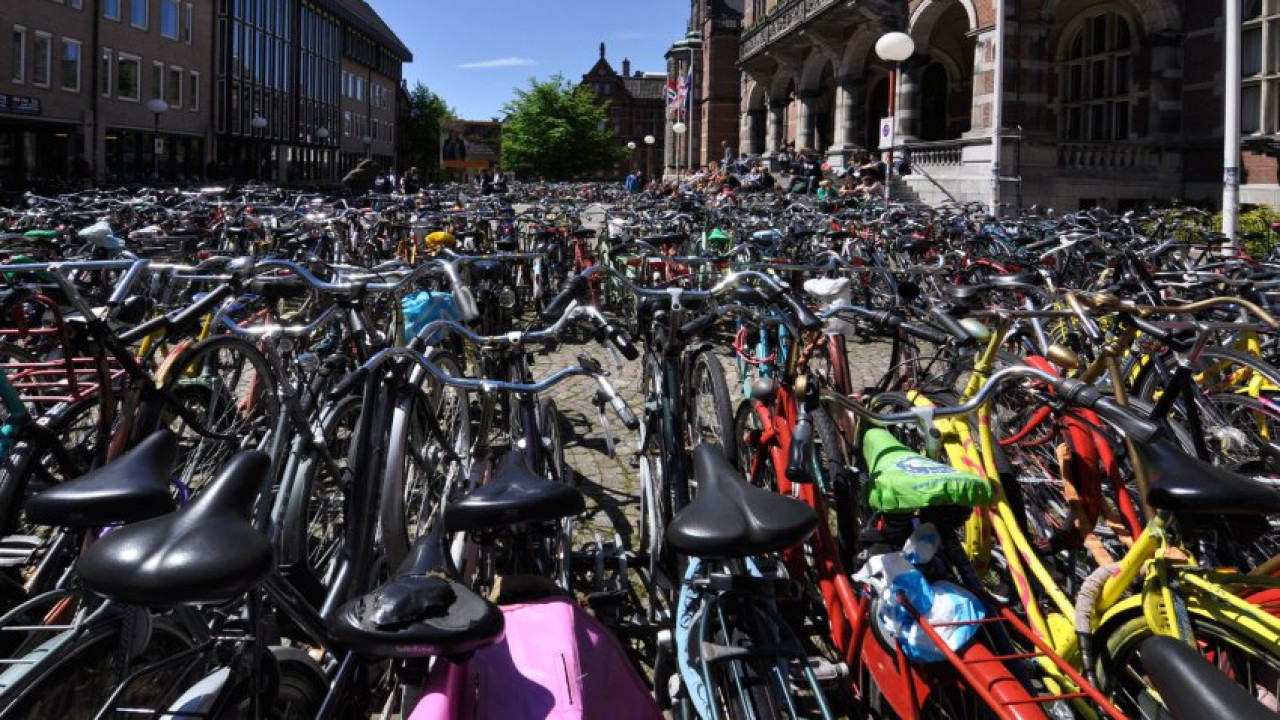 Nowhere else in the world, is there such a high percentage of people using the bicycle for transport as in Groningen. The great number of students in the city and the stimulating policy of the township result in a 60 percent share of cyclists in normal day traffic. Hence you could say Groningen is the bicycle capital of the world.
That is obviously something to be proud of, as it contributes to a better world. However, the extreme amount of cyclists in Groningen also causes multiple problems for the city. What is the downside of being the bicycle capital of the world?

Firstly, roughly 60.000 inhabitants of Groningen are students, which often use the bike as their main mode of transport. Since lectures often start at the same time for most students, it are these kind of moments on a day where the excessive amount of cyclists cause trouble. Cyclists repeatedly neglect the traffic rules, creating dangerous situations for pedestrians, car drivers and themselves.
From statistics of the Rijkswaterstaat, a growing number of accidents at crossroads can be observed. In Groningen, there are 20 black spots, which are places where there have been a minimum of 10 accidents in the preceding 3 years. Furthermore, the most dangerous junction in the Netherlands is situated in Groningen: the intersection of the Stockholmstraat, the Bornholmstraat and the Kotkastraat counts a substantial total of 30 reported accidents.
To create a more safe environment, especially in the city center, the township is discussing the idea of creating new bike routes around the center to divert cyclists.

Secondly, there is an insufficient number of parking spots for bicycles. Especially near university buildings, the number of bikes can be dramatic. This results in the creation of unintended roadblocks. Complete sidewalks turned into self-named bike spots, causing pedestrians to walk over the road, which obviously is unsafe. Furthermore, emergency exits and emergency routes are sometimes being blocked, causing an extra obstacle for the emergency services.
Even though most of these problems are known to the city, they have not come with a solution so far. This is because the township and the university cannot agree on whose responsibility it is to fix this growing problem. The construction of new parking places for bicycles is obviously one of the solutions. Experts also claim that diversifying the starting times of lectures, could cause the number of parked bikes to decrease.

Lastly, due to the large number of cyclists, the number of bike thefts is extremely high in Groningen. In 2015, per 1000 inhabitants 285 bikes were stolen, which is the highest percentage in the Netherlands. This “bike theft culture” is kept alive by mostly students. Wanderers and junkies tend to steal badly locked bicycles and sell them for almost nothing to, very frequent, students. The consequence is that students do not give much value to their bike, as it can easily be stolen. Hence, they do not spend money on a good lock, making their bicycles an easy target for thieves. This “cycle” of stealing bikes is, therefore, being kept alive and the value of bikes is very low. Besides that, the city dredges approximately 1000 bicycles up from the canals every year.
The police have been trying to raise awareness of this problem by promoting locks, but it is still a large problem.

The chaos in traffic, the lack of parking spots and the high number of bike thefts are serious issues in Groningen. However, these problems are solvable and hopefully will be solved. After all, it is great that all those people use bikes because that would have a lot worse of an impact on the environment if they all would use a car. Using an eco-friendly mode of transport is part of creating a better future, but there is still a lot of work to do.

← Previous: The Riemann Hypothesis: how to earn a million with math? Next: The Butterfly Effect →