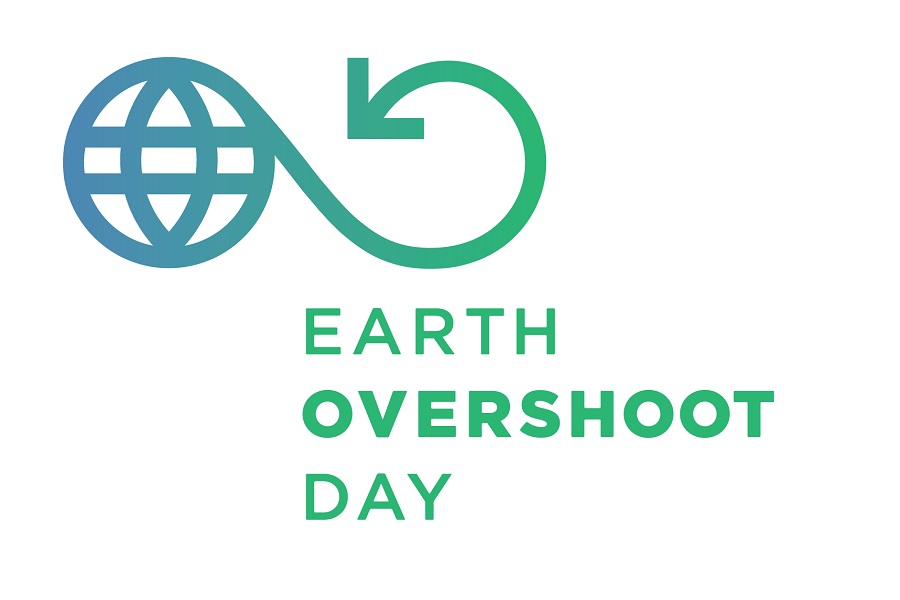 Earth Overshoot Day is the calculated date on which humanity’s resources consumption for the year exceeds Earth’s capacity to regenerate those resources that year. According to the Global Footprint Network, in 2019 the Earth Overshoot Day was on 29 July, which is earlier than ever. This date has moved up the calendar by two months over the past 20 years and not a single of the EU countries is performing at a sustainable level yet.
World’s population is using natural resources 1.75 times faster than our planet’s ecosystem can regenerate. This is possible because we are reducing our natural capacity, which compromises humanity’s future resource security. The costs of this overspending of resources are becoming increasingly evident in the forms of soil erosion, biodiversity loss, deforestation and the buildup of carbon dioxide in the atmosphere.

Global Footprint Network measures humanity’s demand for and supply of natural resources and ecological services and calculates every year the Earth Overshoot Day. This date is calculated by dividing the world biocapacity, which is the number of natural resources generated by the earth that year, by the world’s ecological footprint, which is humanity’s consumption of the earth’s natural resources that year, and multiplying by 365.
The biocapacity is measured by the amount of biologically productive land and sea area available, which provides the population’s resources and absorbs its wastes, given current technology and management practices. The areas are adjusted proportionally to their biological productivity and expressed in global hectares (gha). The ecological footprint takes primary products (form cropland, forest, grazing land and fisheries) into account to calculate the area necessary to support the consumption of the population.
For example, in 2016 Switzerland had an ecological footprint of 4.64 gha per person and a global biocapacity of 1.63 gha per person. This implies that it would take (4.64 / 1.63) = 2.8 earths if everyone lived like the Swiss. You could also say that Switzerland’s Overshoot Day is (4.64 / 1.63) * 365 = 128th day in the year, which is the 9th of May. 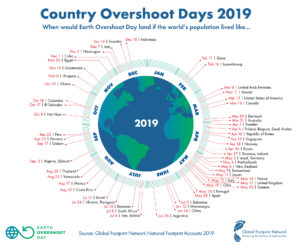 Some countries show a remarkable trend in biocapacity and ecological footprint. I will point out some interesting countries.

Due to a carbon footprint dropping of 11.7 percent between 2014 and 2016, the total ecological footprint decreased 8.8 percent. The total carbon footprint of the United Kingdom declined by around 26 percent since 1990, which is faster than any other major high-income country. This significant decline is due to a cleaner electricity mix based on gas and renewables instead of coal and the falling demand for energy across homes, business and industry. Another factor is the decrease of fossil fuel emission over the past decade without decreasing their gross domestic product (GDP). 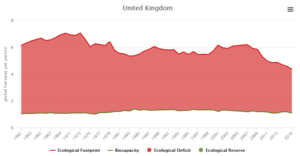 Many countries in Europe show the same trend as the decrease in fossil fuel emission without decreasing the GDP in the United Kingdom. Since 2007, the total ecological footprint has due to this trend declined by 15 percent, lowering the ecological deficit by about 34 percent. Unfortunately, Europe still uses 35 percent more of humanity’s resources than its own natural ecosystems can renew. 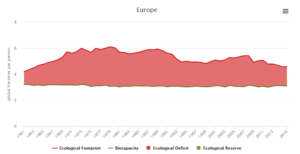 In the United States, the total ecological footprint has decreased over the past decade. A significant factor was the competition from natural gas and renewables that displaced coal-fired power as a cheaper option for electricity production. On the other hand, due to colder winters with more use of oil and gas for heating and hotter summers with increased power usage for cooling, the emissions of carbon dioxide rose by 3.4 percent in 2018. This was the biggest increase in 8 years. Other factors were a boost in manufacturing and a relative expansion of the national economy, which led to higher emissions from factories, trucks and air travel. 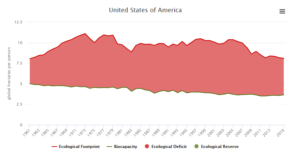 Russia’s ecological footprint is decreased by 12 percent since 2011. This is mainly due to the continued decline of oil prices since their 2012 peak and the sanction imposed by the United States for Russia’s interference in Ukraine. These factors make for example beef import too expensive for most potential buyers in Russia. Taking this into account, Russia’s stop on exporting food products to the 28-nation European Union gave a 38 percent drop of the grazing footprint between 2012 and 2016 in Russia.
Next to that, Russia expanded farmland areas with 3 percent, which improved the total ecological reserve by 85 percent since 2011. Unfortunately, it also lost 1.6 percent of its forest biocapacity over the same time. 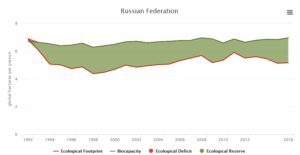 Unlike European countries, the total carbon footprint of China increased by 39 percent from 2007 to 2014. Due to a significantly reduced use of coal which was replaced by expanded renewables and nuclear power generation, this decreased by 2 percent from 2014 to 2016. However, in 2017 and 2018 electricity demand grew so fast, driven by growth in heavy manufacturing and contributions from household use, the low-carbon sources could not keep up. Due to the incline of coal-fired power generation, the emission grew again by 2.3 from 2017 to 2018.
Like Russia, China increased its total cropland biocapacity by 19.3 percent, such that the total biocapacity grew by 13 percent. A significant factor is the policies and government spending designed to improve agricultural sciences and practices in order to improve the stability and performance of agriculture. In this way, China wants to feed a large part of the population from a relatively small area of available farmland. Next to that, China has been expanding its total forest biocapacity by 32 percent since 1990. 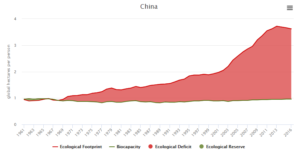 There are many campaigns in order to #MoveTheDate. If we for example reduce global meat consumption by 50% and replace these calories through a vegetarian diet, the Earth Overshoot Day would move by 15 days (10 days are from methane emissions). Or if we for instance reduce the carbon component of the global ecological footprint by 50%, Earth Overshoot Day would move by 93 days. Global Footprint Network aims to move the date 5 days back annually. In this case, humanity can reach one-planet compatibility before 2050. Do you want to explore the data of Ecological footprint and biocapacity yourself? Have a look at the site of Global Footprint Network: https://data.footprintnetwork.org/#/?/.

← Previous: The Muffin Problem Next: AlphaZero: the new king of chess →