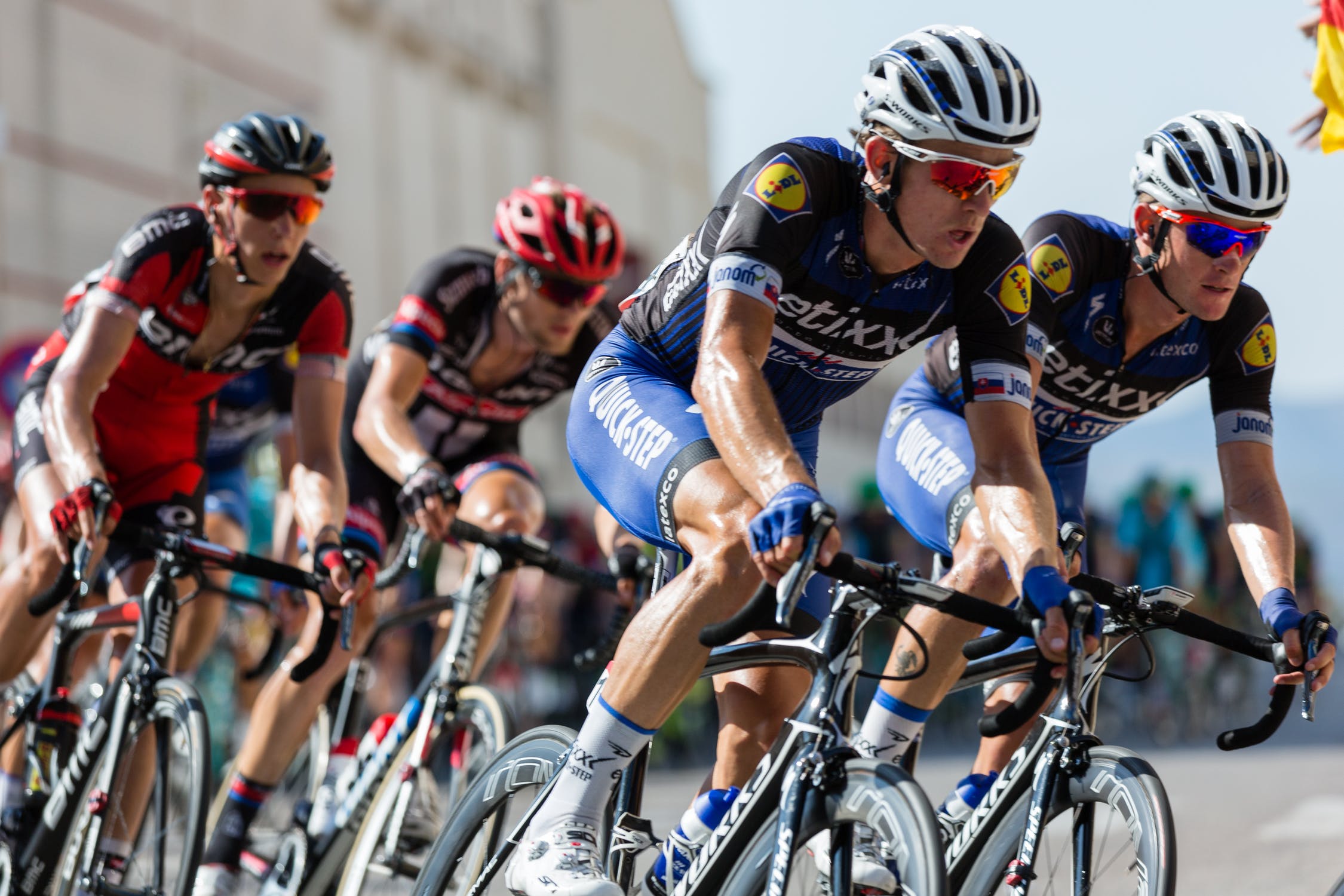 In seventeen days, it is the most wonderful time of the year for cycling fans: the Tour de France will start again. This year, the Tour will cover a total distance of 3328 kilometers through four different countries over a total of 24 days, in which only three rest days will be held. In most of the 21 stages, cyclists will try to break away from the main group of riders, the peloton, create distance between themselves and the peloton and try to win a stage. It turns out that the optimum time to make such a breakaway can be determined using a mathematical model. In this article, the model will be explained. The main result is that the optimum time to make a breakaway is when cycling uphill.

What is a breakaway?

The mathematical model derived by L.H. Gaul, S.J. Thomson, and I.M. Griffiths in the article ‘Optimizing the breakaway position in cycle races using mathematical modelling’ predicts the optimum time for a rider to break away from the peloton. The peloton is the main group of riders in a cycling race. The reason that cyclists ride in a big group is that it reduces the air resistance experienced by the cyclists. As the energy savings from this are quite big, it is favourable for a rider to stay in the peloton. However, to be able to win a stage, a cyclist has to break away from the peloton at some point. As this costs more energy than staying in the peloton, an interesting question is when it is optimal to make this breakaway. This question is answered in the model of Gaul et al.

The model for a single rider

Gaul et al. start by forming a mathematical model for the one-dimensional motion of a single rider. First, some notation is introduced. The motion of a rider is characterized by the distance travelled along the course,

. Then, the course undulations are characterized by the angle of incline

and to describe the motion of the rider in the direction of travel, Newton’s second law is used:

is the mass of the rider. Moreover, the force

is the total force. The forces considered are as follows:

These forces are schematically shown here:

Solving the model for a single rider

The model is solved by Gaul et al. for

corresponds to the time one is interested in. Moreover, they impose two initial conditions:

is the velocity of the rider. Then, the second-order differential equation is non-dimentionalized in the paper, where parameters are chosen to obtain the dimensionless governing equation:

where a dot means differentiation with respect to time. Moreover, the time taken to travel the total distance of the course

is obtained in the paper by the following equation:

where the details of the functions can be found in the paper.

Modelling the peloton and the breakaway

These equations are now used by Gaul et al. to seek an optimal strategy for a rider to break away by modelling a group of riders and a breakaway. In this model, there is a single breakaway rider. This rider then stops profiting from the drag reduction of the peloton. Here, Gaul et al. consider a course of length

and find the time it takes the peloton to complete the course. They call this

. The breakaway rider travels with the peloton until some point

before leaving the peloton and travelling alone. This also gives the time for the breakaway rider to travel the course:

. The paper seeks for the maximum difference in completion times:

by varying the breakaway position

Gaul et al. use the following equation to capture the motion of the peloton:

where the mass factor

, as the mass is scaled by the average mass of the riders in the peloton. Moreover, they use a drag multiplication factor of

, as a rider that cycles directly behind another rider experiences a drag reduction of approximately one-third. As a rider escaping from the peloton needs a higher pedal force of

, the total pedal force of the rider will be

. For a single breakaway rider, the following equation holds:

Using these expressions, Gaul et al. found the initial extra force a rider will need to provide to accelerate away from the peloton:

Then, the time difference between the breakaway rider and the peloton completing the course is found by

, where the details of the functions can be found in the paper.

that a rider must use to break away from the peloton, has to be high enough to also account for the increase in the drag force of a solo rider. Here, Gaul et al. considered the movement of potassium ions out of the muscle cells. They linked the potassium concentration to the force output and included a stamina limitation. This gave them an equation that describes the decay of the pedal force over time after a breakaway. The details of this equation can be found in the paper.

Results of the model

Using these equations, it was found that it is optimal to perform a breakaway when cycling uphill. The reason for this is that the velocities of the riders are lower and the drag reduction of the peloton is thus less significant. It is also best to break away at the beginning of a long hill climb, as the velocity is then expected to be low for a sustained period of time and the rider can thus create distance between themselves and the peloton. However, if an uphill section is followed by a downhill section, or if the uphill section is quite long, it might be optimal to breakaway halfway up the hill. The reason for this is that the extra force can then be sustained up to the top of the hill.

Can you now win a Tour de France stage?

So, using this mathematical model, can you now win a stage of the Tour de France? The short answer is: only if you are a very good cycler. Unfortunately, Mathematics alone is not enough to win a stage in the Tour de France. You still have to train to be a good cyclist, be able to join a cycling team, be chosen to start The Tour, and then still have to have enough power to break away from the peloton. Moreover, you have to be a man (as only men can start The Tour). So, winning a stage of the Tour de France by performing a breakaway is easier said than done. However, you now know the Mathematics behind such breakaways.

← Previous: Are you living inside a black hole? Next: Portfolio dynamics 101 →