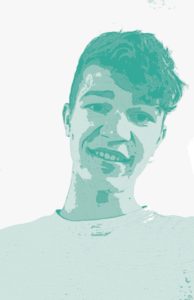 “Why is playing darts even called a sport? I could do this with my eyes closed!”: just one of the many prejudices a lot of people have when speaking about the oh-so controversial ‘sport’ darts. The fact that most of us only play darts when we are drunk and that most of the professional darts players you see on television are not in great shape does not really help getting these stereotypes out of the world. But trust me on this one: for mathematicians and statisticians, analysing the game of darts is a real sport! There are so many interesting numerical aspects and probabilities in darts that I could write about this for days if I wish to do so. We could simulate dart games, change some parameters (e.g. dart weight) and see what it does to the score, we could analyze the possible scores we can throw to optimize our game or even estimate pi! As you can see, there are many interesting things we could look at in the game of darts and that is what we are going to do in this article. Firstly, let me get back to the first sentence of this article.

By definition, a sport can be described as a physical or mental game that has to be played according to a certain set of rules. This immediately straightens the prejudice given in the introduction: yes, darts is a sport. Darts is a game in which the player throws darts at a circular target (the dart board) from a distance of approximately 8 feet. The dart board is divided into twenty equally large (or small, if you like) segments. Every segment corresponds to a point value from 1 to 20. On the edge of the board there is the double ring, the value of the segment in which you throw gets doubled if you hit it in here.  Then there is the triple ring more close to the center of the board, in which the value of the segment you throw the dart in gets tripled. Lastly, there is the center of the board with a green circle with a smaller red circle in it. These are called the outer and inner bull and are worth 25 and 50 points respectively. A player gets three darts per turn. The goal is that you start at some value, say 101, and end up with exactly 0 points while throwing as little as possible amount of darts. In the professional field, another restriction is that you have to end with a double. For example, if you have 16 points remaining, you have to end with double 8. 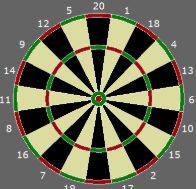 In the professional field of darts, the number of points players start with is 501. As mentioned previously, a player gets three darts per turn so we clearly do not have to worry about finishing yet: we first need to score. It doesn’t take a genius to find out the highest score you can throw is 60 (triple 20) and that the maximum score you can throw per turn is 180 (60 * 3). Unfortunately, this is not as easy as it might look when you see the pro’s do it: the triple 20 covers an area of 269 square millimeters which is approximately 0.9% of the dart board.This area gets even smaller when there is already a dart in it, since there would be less space for the other darts. Ofcourse, for professional dart players, the probability of hitting three triple 20’s isn’t 0.09 * 0.09 * 0.09; they are very highly trained in aiming at the board thus have a way higher probability of throwing this maximum score (or at least a single triple 20). But for beginners like most of us, aiming well at the board is almost impossible; for the complete beginner it’s even an accomplishment to hit the board. Therefore it might not be such a good idea for a beginner to aim at the triple 20 if he/she wants to win a game! But what is the best spot to try to throw your dart at to maximize score?

As mentioned in the previous part, if you are a good dart player the best spot to aim at is the triple 20. Trivially, the best spot for the complete beginner to aim at is the center of the board, since it maximizes the probability of the player actually hitting the board. But what is your best bet if you are between these two extremes? Let’s analyse! Let’s model a dart throw as ‘a player aiming at an objective’, and their accuracy of hitting this objective is normally distributed with mean

. For the people that are unfamiliar with these terms: we describe the accuracy as a bell (see image) that describes the probability that a dart will land in the aimed-at location. The mean speaks for itself and the easiest way to think about the standard deviation

is that it’s a measure of the average deviation around the average. The PDF of the normal distribution is given by:

Looking at the definition of standard deviation, it is straightforward to assume that a good darts player will have a smaller standard deviation than a beginner: they are more likely to hit what they aim at. We could simulate the process of throwing a dart as we modelled it before in some programming language (I spare you the details) and play around with the values of the standard deviation to see what happens to the average score we throw. For example, suppose we throw our darts with a standard deviation of 17mm, that is, the average deviation around the point we aim at is 17mm. We obtain the following plot: 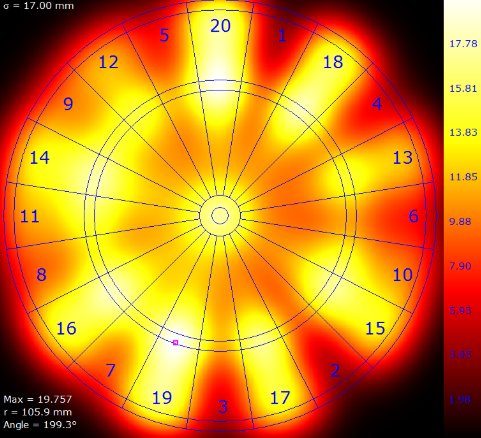 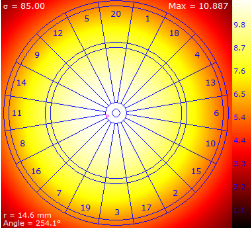 Clearly, this confirms our statement that it’s best for a true beginner to aim at the center of the board. Notice how a beginner would probably still obtain points by aiming outside of the board! When we run the simulation for different standard deviation values and plot the optimal aiming point for the different values we get the following plot: 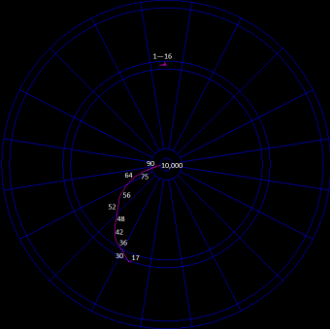 Analyzing the game of darts is just one of the many ways in which we can use mathematics and probability theory to optimize and analyse processes. Parameters and functions that might not look very practical at first turn out to be extremely applicable in the ‘real world’! So what are you waiting for? Grab a set of darts, choose an aiming point and estimate your average standard deviation from this point. Use the plots and theory given above, pick an opponent and show them how it is done! 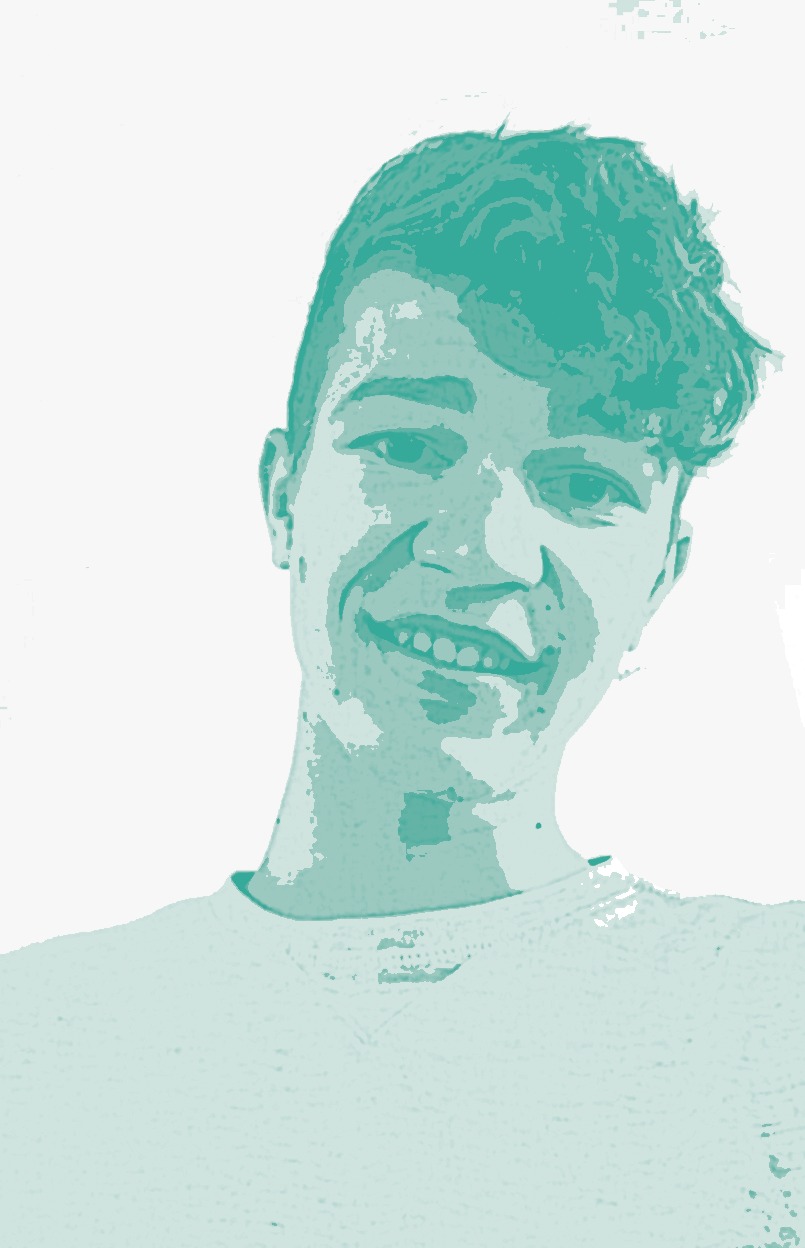