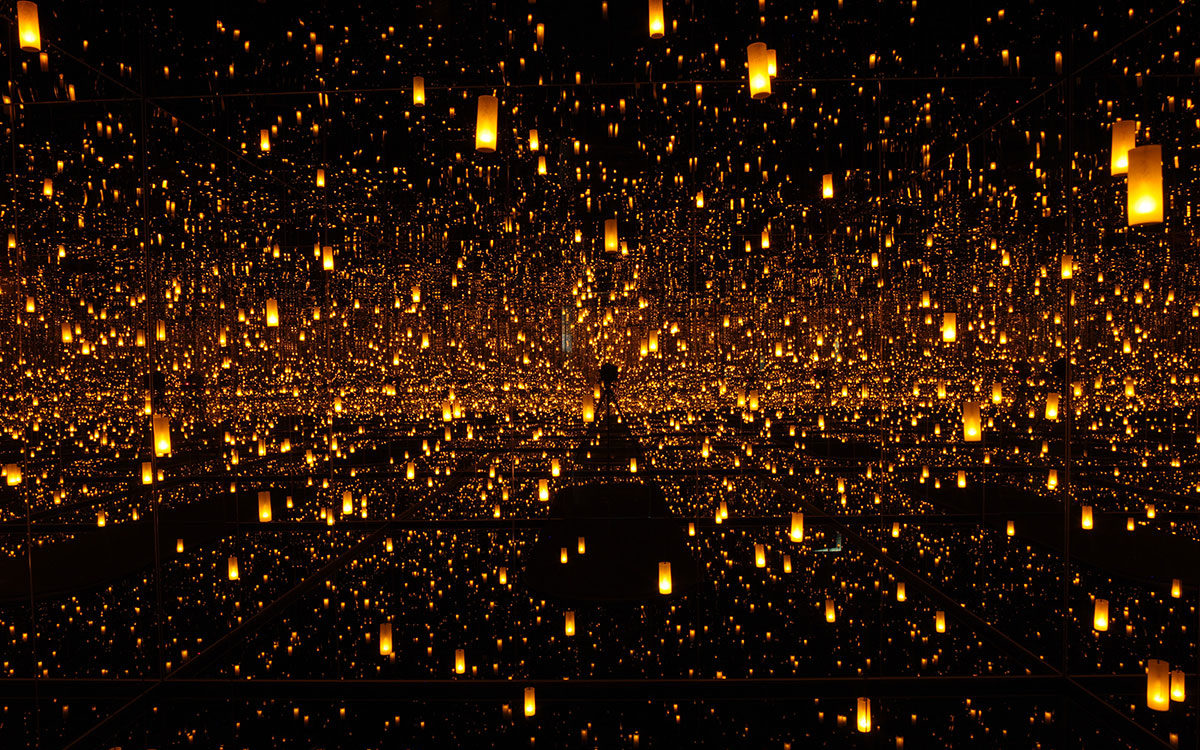 The largest number you can think of as a kid is probably around a hundred. As you get older this is going to be a thousand and at a certain age, you are starting to realize that there is an even bigger number. Eventually the question starts to rise: what is the biggest number? Infinity? No, unfortunately you are not there yet. Infinity is the concept of describing something without any bound larger than any natural number. In phrases as ‘infinity counts or measures things’, infinity is often treated as a number, while it is neither a natural nor a real number.

Georg Cantor, a German mathematician, formalized many ideas related to more than one type of infinity during the turn of the 20th century. During that time, he was taken for a fool and treated badly for his thoughts. Later on in his life he spent a lot of time in mental institutions. Eventually, he died there and it was only just before he died when people finally recognized his ideas. 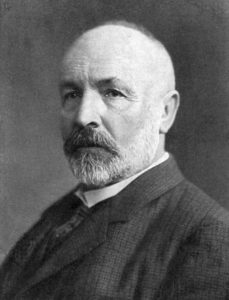 Let’s start with some formalities. When a number refers to an amount of things it is called a cardinal number. For instance, the natural numbers are used as cardinals. Set theory is a branch of mathematical logic that studies sets, which informally are collections of objects. Two sets have the same cardinality when each attribute of one set can be matched with one attribute in the other set. There are infinite sets of different sizes, called cardinalities. If you look at it this way, people often wonder how many natural numbers there are. This amount is named aleph-null, the first smallest infinity, where aleph is the first letter of the Hebrew alphabet. The first infinity is called countable, except you cannot count infinity because it goes on forever. Therefore, a lot of mathematicians prefer to call the first infinity listable. Not only the list of natural numbers is aleph-null, the list of even numbers and odd numbers is aleph-null as well . Moreover, the set of rational numbers, which includes fractions, is aleph-null too. This might seem strange, since there appear to be more fractions on the number line. However, it is about the way the numbers are arranged. As it turns out, Cantor showed it is possible to arrange the fractions in a way such that the natural numbers can be put into a one-to-one correspondence where they have the same cardinality as natural numbers. This does not hold for the infinite set of real numbers, due to the fact that real numbers cannot be listed.

Another way to understand the concept of infinity is by the Hilbert Hotel Paradox. Here it becomes clear it is not about the amount of attributes a set contains, but the order of the attributes. Imagine there is a hotel with infinite rooms to stay. Assume that all of these rooms are taken by a person each. Hence, we are dealing with a one-to-one correspondence. Then all of a sudden another person drops by. Intuitively, one may reason the hotel is already full. Nevertheless, shifting all the persons that are staying in the hotel one room up causes the first room to be free. Since there are infinitely many rooms, it is possible to shift everyone one room up. In this way, the hotel is never full, since the new visitor can go to room number one. Even when an infinite amount of people shows up, the guests in the hotel can shift up an infinite amount. Only if there was a final room you could count all the rooms and therefore have a maximum.

Aleph-null is bigger than any finite amount. Still we are able to count past it. In order to understand how to count past infinity, visualize the following. A set of lines is drawn where each line is a fraction of the size and a fraction of the distance from each last line. The number of lines is equal to the number of natural numbers there are. The line can therefore be matched one-to-one, each natural number is paired with a line. In addition, both sets have cardinality aleph-null. Adding a line next to the set yields a cardinality of aleph-null as explained through the Hilbert Hotel Paradox. 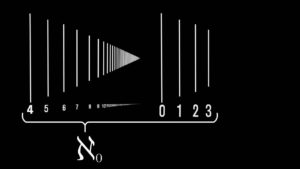 Moreover, as seen before, adding lines isn’t going to make a difference. Instead of numbering each line one-to-one, each line is numbered according to the order it was drawn in. Consequently, the question arises what number should be assigned to the line that is drawn next to the set after the set of lines that was already drawn. The line does not contribute to the total number of lines. However, to be able to label it according to the order it became apparent that we need a set of labels of numbers that extends past the naturals. Besides the cardinal numbers there is another type of infinite numbers, namely, ordinal numbers. As the name says, ordinal numbers may be identified with well-ordered sets. These sets include points after an infinite number has already been counted. Or as most mathematicians would say, listed. The first transfinite ordinal is omega. It is the next label you will need after using up the infinite collection of every single counting number first. Pretend you are in a race and you ended on the omega’ place. This implies an infinite amount of participants finished before you did. After you finished, it is omega plus one that finishes. As made clear, ordinal numbers aren’t about the amounts. They merely tell the order type of the amount. The order type of a set is just the first ordinal number not needed to label everything in the set in order. Therefore, for finite numbers cardinality and order type are the same and the order type of all natural numbers is omega. Moreover, omega plus one isn’t bigger than omega. Instead, it just comes after omega.
As said before, it can be shown that there are infinities bigger than aleph-null. The power of a set of a set is the set of all different subsets you can make from it. For example, from the set of 1 and 2 you can make either the empty set, a set containing 1, a set containing 2 and a set containing 1 and 2. Therefore the power of the set is four. Two to the power of the amount of members in the original set, is the power of that particular set. In addition, the power set of all the naturals is the power set of aleph-null. Moreover, making a list of all the subsets from natural numbers enables us to number all the subsets. After this Cantor’s Diagonal Argument, is applied. It works as a mathematical proof that there are infinite sets which cannot be put into one-to-one correspondence with the infinite set of natural numbers. How this works exactly isn’t important for now. What is important, is that it will yield an even bigger list with more subsets. This list, this new set of subsets, yields a bigger infinity than aleph-null. Again, repeating this process, taking the power of the power sets of natural numbers will give even bigger infinities and so on.

Besides the Hilbert Hotel Paradox, there are a few more examples of situations that go against our intuition about infinity in the first place. Infinity fits perfectly in our mathematical world. Nevertheless, in the physical world people still have some difficulties of understanding infinity when one tries to picture it. Two other paradoxes help us to get a better idea of the concept of infinity. One of them is Gabriel’s trumpet. Picture a trumpet that is wide on the end and then, while moving to the other side of the object, the trumpet becomes thinner and thinner. The surface of this trumpet is infinite. On the other hand the volume of the trumpet is finite. As someone would paint the trumpet he would need an enormous amount of paint and he would keep painting the object as it gets thinner and thinner. Controversially, if he wanted to determine the volume he would just fill the trumpet with paint to see how much paint goes in the trumpet. If we think about physical paint one cannot paint the whole surface, due to the fact that the trumpet gets so thin at the end the size of the molecules of the paint are too large. If we had mathematical paint this would be possible. At this point a lot of people thought there was something wrong with the idea of infinity, since they could not match the concept of infinity with the real world.
Another paradox is the St. Petersburg paradox. Assume a casino places one euro in a box. The bet is simple, when a fair coin is tossed and it’s heads you lose one euro, when it is tails you win the one euro from the box. The question is how many euros one should bet for. Frequently, people would bet for around twenty euros. Even though, the chances of winning (which is denoted by p in the formula) decrease by a half each time a euro is added to the bet, whereas the payment for the casino doubles (which is denoted by two to the power n in the formula). This means the expected value of the amount of money a person can win is infinite. Although it doesn’t seem to pay off as much at first sight, simple mathematical calculations with use of the concept of infinity show otherwise.

Cantor established the importance of one-to-one correspondence between the members of two sets. Moreover, he defined these infinite and well-ordered sets and proved that the real numbers are more numerous than the natural numbers. In addition, he defined the cardinal and ordinal numbers and their arithmetic. All in one, it turned out Cantor wasn’t such a fool after all when he proved the existence of an ‘infinity of infinities’.

This article is written by Anne Dumoulin.

← Previous: De val van Srebrenica Next: Roulette: lose your money in the way you want! →