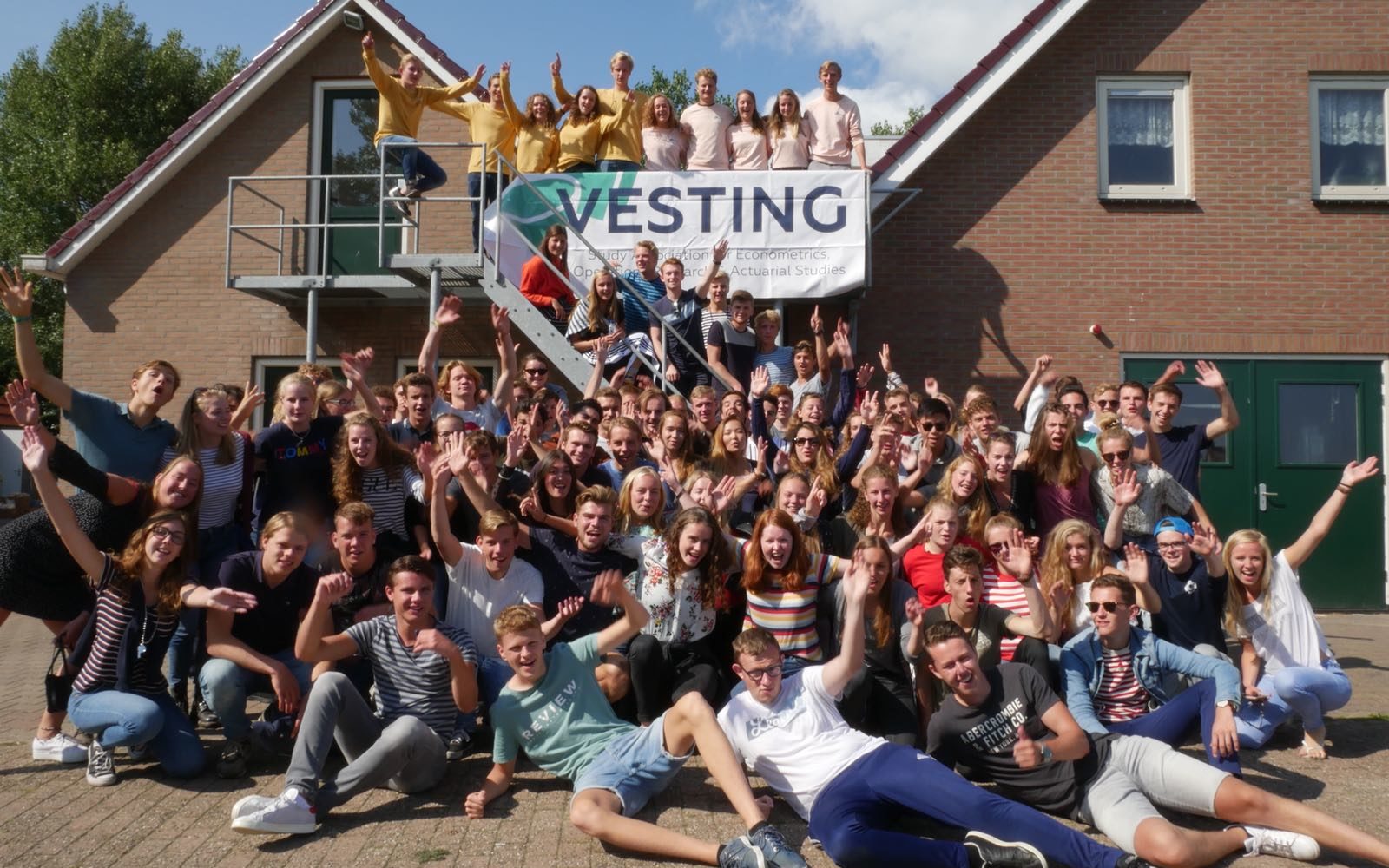 On the 31th of August 2018, at ten o’clock, a large group this years freshmen gathered at the train station in front of ‘het Peerd van Ome Loeks’ in for a VESTING Introduction Weekend that would certainly become for the books. A bus ride through the outskirts of Groningen and Friesland took the group to Holward, where the ferry to Ameland would depart. Once arrived at ‘kampeerbouderij Licht der Zee’ the VESTING Games could officially begin! May the odds be ever in your favour…
Upon arrival the newly established districts got to know each other while waiting for their lunch in the summer sun. As a pushback for the committee this to way to long in Nienke her opinion, but the sun helped her through in defrost the bread…
Then the real games started. We all know that econometricians are very much into games. Thus logically, the VESTING Introduction Weekend is always full with them. During newspaper-hitting, ‘over-the-line’ and the question-game, the groups gradually got to know each other, but the games were really on once the Crazy 88 started. Via human pyramids, mummification by toilet paper, egg smashing and a lot more, the transportators from district 4 came out of the arena as this years VESTING Champion. Up till this day, the rest of the districts and the board is still stunned by this news, with the egg leftovers still sticking in their hair… But according to Renske as lumber from district 6, which left the Crazy88 aside, scored many more ‘gezelligheid’ points with ‘spijkerpoepen’ and ‘ballonnetje trappen’.
Crazy 88 was not the only historical VESTING Game introduced to the up-and-coming econometricians. To speed up the socializing process the famous Gotcha envelopes were distributed. While most people didn’t even have to make an effort or simply couldn’t find their target, our one-and-only Gotcha Queen Evelien tricked 14 (!!!) people into speaking out their forbidden word. Nevertheless, the fame wasn’t hers as she was legendary Gotchad herself by crown prince Maurits two minutes before the end of the game.
At 5:00 PM something strangely odd happened: ‘silence’. In most situations people would consider this as normal but VESTING-members start panicking by the idea. Where was the ‘buis’ alarm? It never showed, leaving us waiting until next year. We all decided to pluck up courage and enjoyed a cold beer (or a cold coke) in the afternoon sun. Meanwhile the cooking squad was prepping over 250 wraps to provide some energy for one of the most intense evening games ever seen. It turns out that small games, usually played by little children, gets out alarmingly much fanaticism. Limbo dancing and ‘stoelendans’ were a great success and a great way to start the evening!
Saturday morning the students were introduced to a less appreciated alarm: pots and pans at 8:30 AM. The morning exercises were met with mild enthusiasm. Understandable of course, because leapfrogging after you’ve just woken up is not something you do every day. Breakfast, on the other hand, was devoured with a passion lacking previously. Where the creative wake-up service left the VESTING Firstyears cold during the early morning hours, the talks about the different VESTING Committees seemed to create a huge delight, with students being left in peace and other scrambling towards the enrolment sheets. Another highlight of that morning was Pim Heijnen’s ‘advice’ (seen by many older VESTING Members as a joke) to really spend 40 hours a week on studying… this clearly left an impression on the sunbathing/sleeping freshmen in front of him. We shall see how serious they take it…
The afternoon was filled with various (water) activities, ranging from soapy dodge ball to slippery baseball and as grand finale a blow-up obstacle course. While some even had a hard time to enter the course, others flew across. The energy levels had fortunately returned at this points with things getting heated and competitive between the batting team and the field team multiple times and pushing and pulling on the obstacle course even led to minor injuries. It was not mend to become the real Hunger Games!
In the evening, it was time to recover from a memorable day. After some fries and a snack, the group set course for the beautiful beach Ameland has to offer. A little stroll through the dunes brought us a breath taking sunset! Hero of the day (or even the weekend) Mikey, built a warm campfire. A unique moment with incredible company. In short, a night never to forget!
Sunday morning the freshmen awoke from a longer sleep-in for the final day of the Introduction Weekend. After breakfast, it was already time to pack the bags again and get ready for the iconic group picture. In true Econometrics-style the afternoon was filled with the VESTING Veiling where all the bread, hagelslag, and dessert were sold in livestyle packages. Ewoud turned out to be the lucky winner of the mystery box worth for a price of sixteen euros. Exhausted after the intense introduction weekend everyone went back on the boat.
Freshmen who didn’t feel like cooking or could not accept that the weekend had finally come to an end traditionally made their way to Pizzeria Napoli for a pizza or pasta with their newly-found friends. There they toasted to a lovely sunny weekend and many more VESTING Events to come!

This article is written by: Ewoud Vos