Giro d’Italia: the fight for pink and against Covid 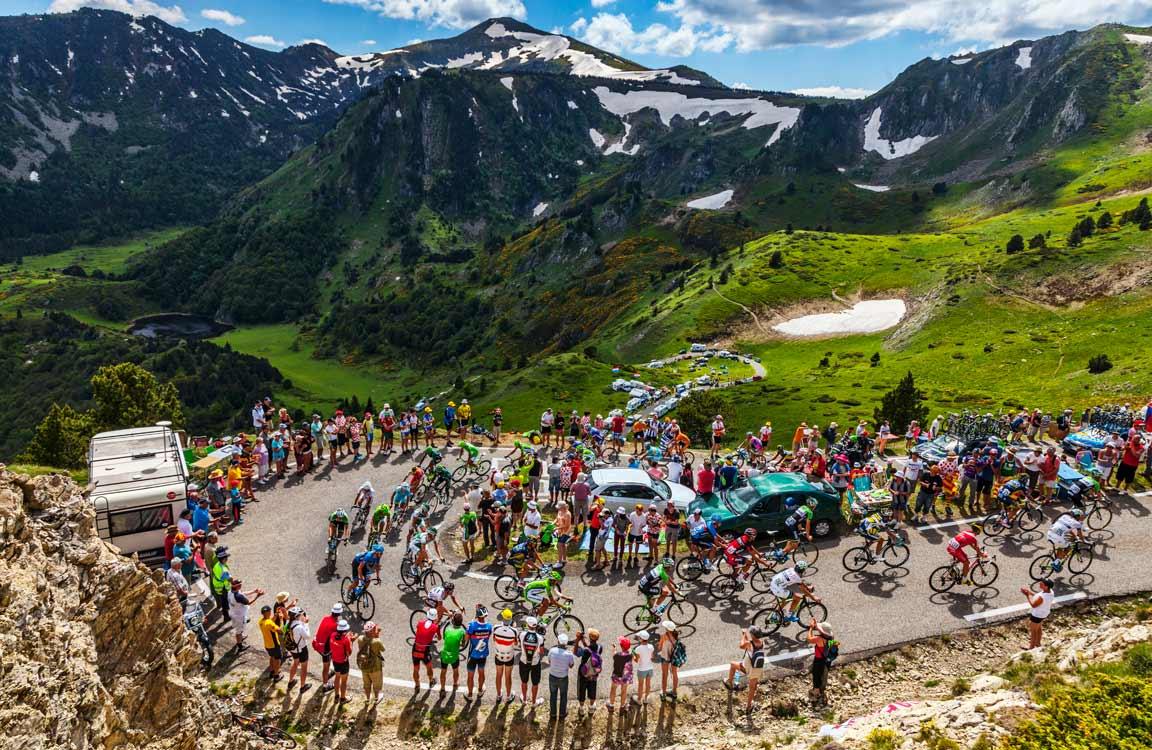 It is 16:00h. The tension is building. They are coming. In the distance, you hear the sound of helicopter blades swelling. You look around. Every flag imaginable is present, people have dressed up and they are ready to party. You check the live stream, they started the climb. A helicopter has come into view, getting closer by the second. The sound of cheers resonance up the mountain. The first rider is spotted two hairpins below. Almost now. Then they take the last turn before the one you are standing in. The thundering roars pierce your ears as the riders pass by. People run alongside them while shouting to them from only centimeters away.

Sports in a pandemic

This could be a description of a spectator of any mountainous bike race. However, things have changed since the Covid-19 pandemic struck. Social distancing is the norm in many countries, resulting in attending sports events becoming next to impossible. Many will have seen the empty stadiums and stands in football, baseball, or formula 1. Next Saturday, the Giro d’Italia will kick-off, a sporting event taking place on public roads. That makes you wonder, how do sporting events without closed-off stadiums or circuits keep Covid-19 out?

2020 yielded the cycling world imported insights into how to cope with the pandemic. However, many races were postponed to the autumn, when measures had been relaxed. In 2021, the goal has been to return to the normal race schedule. Until now, this has succeeded quite well, with organizers using measures customized to their countries’ regulations and resourcefulness. In Belgium, races followed the standard route, while in Holland, modified circuits were used. However, both were closed off entirely for the public. On the other hand, during the Tour of the Basque Country, fans were urged not to go but no action was taken. This resulted in the roads being packed with spectators and raised eyebrows across the cycling world.

Giro organizer RCS Sport already experienced what it is like to organize a bike race in 2021. When their ‘Strade Bianchi’ was held in March it traversed areas that were put into a lockdown due to the increase in Covid-19 cases. In April, during ‘Milaan – San Remo’ the course was adjusted a few days in advance to avoid municipalities of which the mayor revoked the right to traverse. However, both of these races were only one-day races, while the Giro d’Italia is stretched out over 3 weeks, during which contact with other participants is unavoidable. A positive Covid-19 case could have a disastrous impact, ranging from losing staff to being excluded from the race or even causing an outbreak within the [expand title=peloton] Largest group in the race or (in this case) general professional cycling community. [/expand]. Therefore, extra care is taken to avoid the Covid-19 risk.

Due to the developments in the international health situation, the [expand title=UCI] International Cycling Union [/expand] updated its health protocol for 2021. This protocol includes all measures taken during the Giro d’Italia to keep the riders safe. Six and three days before the start of the race all 184 riders and their 460 staff members must undergo a PCR test. A negative result for both will grant access to the ‘team bubble’. During the whole three weeks, this bubble must be maintained as well as possible. This is done by grouping different teams in different parts of an accommodation, testing all team members twice more during the race, and redesign communal areas such as the media zone or feed zone. Even celebratory hugs after a win are discouraged.

Despite all effort, a bubble could still be penetrated by the virus. In that case, the team is obliged to share all relevant information on contact within the bubble with the race organization. The organizer must then decide how to act. The positively tested individual must leave the race, but further action depends on the degree of contact and the phase of infectivity. Therefore, it could occur that Mitchelton-Scott and Jumbo-Visma were excluded as a whole, while Team Sunweb only sent Michael Matthews home during last years’ Giro.
However, many teams stated that their whole squad will leave the race when a rider tests positive, to set an example during these times of crisis.

Although extensive measures are taken, the biggest risk is the hardest to control: Spectators. RCS Sports has announced that spectators will be allowed along the race route, as long as they follow government measures. This entails the obligation to wear face masks and to keep distance. Italy has experienced the devastating impact of a large outbreak and is known for the firm action taken against those not following the rules. Nonetheless, RCS Sports has some tricks up its sleeves when things go south. The most popular spots along the race route are the hairpins of a mountain pass. Since those often only have a limited amount of access roads, it is possible to close down the whole mountain for the public. After that, it can be decided upon whether only a limited number of spectators or none at all are allowed to cheer on their heroes during the climbs.

Coping with the Covid-19 pandemic during the Giro d’Italia is not as straightforward as it is for other sports events or even one-day bike races. The UCI has written an extensive health protocol to keep riders and their staff safe. However, the biggest risk is encountered during the race itself. Measures are taken to limit the risk of contamination by spectators and more measures can be employed when needed. Hopefully, this will result in a Giro d’Italia continuing for the full three weeks. Probably without stories as in the intro, but with the same level of excitement for the fans as in the pre-pandemic times.

← Previous: The influence of the Austrian School in Economics Next: The World of Sports Betting →