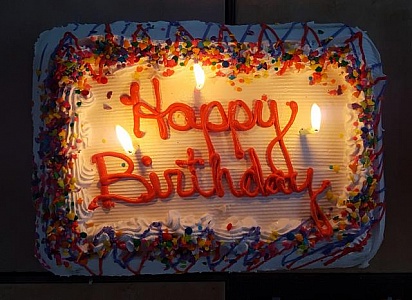 At the World Cup in Brazil in 2014, in 16 out of the 32 teams two players shared the same birthday. Considering each of these selections consisted of 23 players and there are 365 days in a year (excluding February 29), it seems like an enormous coincidence that this was the case for 50 percent of the teams. However, this trivia fact isn’t such a coincidence at all. In fact, the odds of two people in a group of 23 sharing the same birthday is 50.7 percent. This is what we call the birthday problem (or birthday paradox).

Hence, we have proven that it actually holds! With comparable calculations, one can show that 30 people are needed to have a 70.6 percent chance of two people having the same birthday. So in primary school, when we felt lucky as we got two birthday treats on the same day from our classmates, this wasn’t actually so special after all. Furthermore, only 50 people are needed to get a 97 percent chance of having a match. To reach a 99.9 percent certainty we need to have 70 people, so we see that relatively more people are needed to increase the last few percentage points. Hence we see that we have to increase from 70 to 366 people to reach 100 percent (367 if we include February 29). This is a result of the pigeonhole principle. This principle states that if n items are put into m containers, with n > m, then one container must at least contain two items, which speaks for itself.

An important notion on the birthday problem is that we assume that the number of people born on a specific day is equal to the number of people born on any other day of the year. Of course, in reality this assumption does not hold. In some periods of the year there are clearly born more babies on average than other periods. For the interested ones, you can check how common your birthday is on the site of The Daily Viz. Now, the question is what impact this non-uniform distribution of births has on the outcome of the original birthday problem. Well, a research from Mario Cortina Borja and John Haigh shows that there are actually 23 or fewer people needed to have a 50 percent chance of two people having the same birthday.

The birthday problem can also be stated the other way around: “Given the probability of two people having the same birthday, how many people are there in this group”? Of course, the calculations of this problem aren’t that hard and the results won’t be surprising anymore. However, the inverse birthday problem can also be stated as: “Can we estimate the size of a group, given the different number of birthdays?”. This problem is of course harder to solve than the initial question we stated and it is more like a research question. We can, for example, estimate the size of a group of people having a certain disease, given the different number of birthdays. Birthdays and people can be also generalized away in the problem to make the problem more applicable. Some ways how the inverse problem can be solved are via the method of moments for a multinomial model and the maximum likelihood estimate of a Poisson model.

The birthday paradox is a great example of the fact that we underrate the chance that unlikeable outcomes occur as it feels counter-intuitive. Sometimes just a few people are needed to make an unexpected outcome not so surprising, as the probability that something does not happen becomes increasingly smaller as we increase the number of people. Consequently, you can also conclude that even an event with an extremely small chance can happen if you just have enough people. A nice example of this was an experiment on betting on horse races performed by the ‘mentalist’ Derren Brown. For the curious readers, one can find the video “Derren Brown’s The System” on Youtube by clicking here.

← Previous: A different look at online education Next: Do storks deliver babies? →