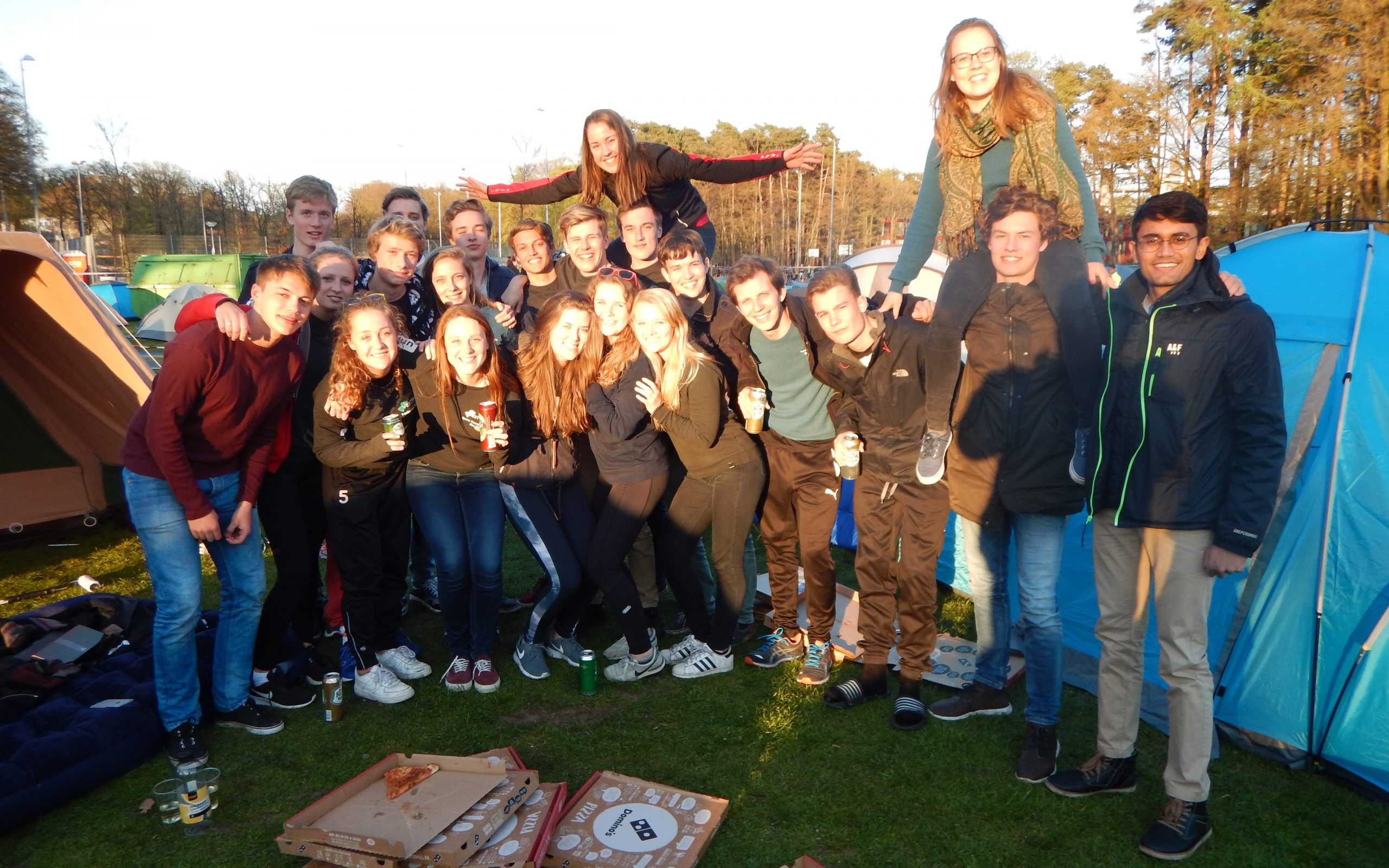 After weeks of training in het Noorderplantsoen and Stadspark, it finally happened: the Batavierenrace 2017!
The Batavierenrace is a relay race of 175 kilometers from Nijmegen to Enschede. There are 25 stages and the distances are all between 3 and 11 kilometers. Unfortunately, we didn’t have enough runners (only 21) and therefore four of us had to run twice.
Around 12:00 AM we all left Groningen to travel to Enschede, even those of us who had been partying all night due to Kingsday. In the afternoon we arrived at the University of Twente, where we met the Sports Committee, who travelled to Enschede by car. We directly started to pitch up our tents, because the first runners already had to leave the camping in the evening. One of our tents was really big, so we turned it into our hangout spot. We shared our dinner in that spot, before the first runners travelled to Nijmegen.
Most of us had to run Saturday morning or even in the afternoon, so in the Coop we bought the first beers and snacks. We started playing (drinking) games in the tent and we all joined for a nice game that Rajeev had introduced to us! A few of us decided to get some rest that night, others thought it would be fun to end our first night in the Vestingbar at the campus. Because the Vestingbar has the same name as our study association, every year we try to receive a souvenir that we can place in the Vesting Room (VK) in the Duisenberg Building. Pieter was very lucky: a nice bartender gave him a pockie with the Vestingbar logo!
While the rest of us was sleeping or partying, the first runners started the race in Nijmegen. This year was the 45th edition of the Batavierenrace, so Boris and Tobias had an amazing start with fireworks! The ‘morning runners’ had to wake up in the middle of the night to travel to their start in Ulft. The last runners could sleep until 08:30 before they took the bus to Barchem. We all did a great job, due to the trainings that Bert gave us in the Stadspark! Our team ended in place 170 out of all 350 participating teams: a result to be proud of!
Anne and Luuk were the ones who had to finish the race and therefore we thought it would be fun to give them an item they had to carry with them the last meters before the finish. In the Praxis, Pieter, Leon and Marie bought a bag of potting compost for Luuk and for Anne they bought a paint roller that was extendable. Giving a weird item to the last runners is kind of a tradition of the Batavierenrace. Lara, our chairman, bought a Smirnoff ice for Anne and Luuk to drink just before the finish.
After the race, the SC ordered some pizza’s for dinner. Everyone took a shower and prepared for the second night! There were two enormous tents built on the campus for the Batavieren party. We had a few beers and played some more games before we went to the party. First we went to the big tents and later that night we ended up in the library, where a band was playing some songs. We stayed up until the early hours and then we headed to bed. We only slept for a few hours, because in the early morning we had to break up the tents and travel back to Groningen.
We definitely had an amazing weekend and we are already looking forward to next year’s Batavierenrace! Hopefully everyone will be as enthusiastic as this year, so we can find enough participants to join our team!

This article is written by Marie Hiemstra