Impression of the Introduction Weekend 2021: Safari 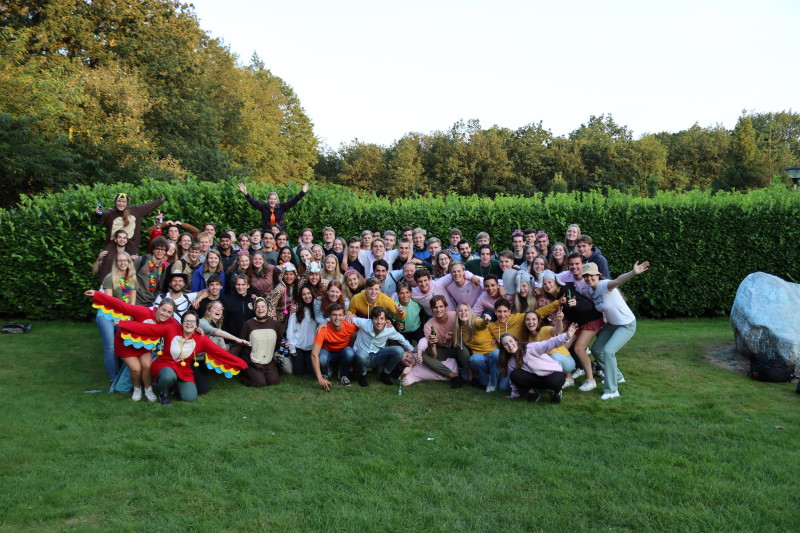 In the first weekend of September, it was finally time for the Introduction Weekend 2021! The weekend was filled with flattering safari costumes, a lot of sunscreen and some nice English. But, most importantly, all the freshmen got to know each other, their mentors and the study association VESTING. Now, let me tell you something more about this nice weekend!

The weekend started on Saturday when we went by bus to a camping farm in Drenthe. The overarching theme of the introduction weekend this year was safari and every mentor group had its own theme. There were flamingos present, as well as parrots and zebras.

After arriving at the camping farm, we started off by playing ‘over the line’ to get to know each other a little bit better. We learned who likes a nice beer and who had enough faith in themselves that they would get all study points this year (we’ll see about that). After that, we divided ourselves into the mentor groups to play some more games like ‘2 truths 1’ lie and ‘Ninja’.

Then it was time to eat some fancy sandwiches after some hard work in the sun. During lunch we were informed about all the things concerning VESTING and also about the study EOR itself. The highlight of the presentations most definitely was when the chairmen of the various committees tried everything in their power to get you to sign up for their committee.

Then it was time to get active again. Luckily it was a very warm day, because many got soaked playing slippery dodgeball, beer pong with water buckets and by running the obstacle course. Luckily you could also sumo wrestle and play volleyball with a giant inflatable if getting wet wasn’t your thing.

Dinner time rolled around and everyone gathered to eat some delicious wraps the cooks had made for us. Then it was about time to make our way back to Groningen and have some drinks at Café De Toeter to wrap up the day. With some nice beers in our hands, we got to meet some more people and find out who had beaten who at sumo wrestling. In short, a nice ending of a good day!

On Sunday we started off by having some lunch together at Huize Maas. After that, the real fun began. It was game on because we were playing Crazy 88. Some people ate a raw onion, some wrote a love letter to a committee member and others told their parents they wanted to quit econometrics. The things people do to win.

Although many were busy playing Crazy 88, even more had a mandatory two-hour break. You see, we can’t miss Max Verstappen racing on Zandvoort for the first time. Luckily Max won, so we could happily proceed with the rest of our day. After playing some more Crazy 88 and laying in the sun at Noorderplantsoen, we went on to eat pizza together. There, the winners of the Crazy 88 were announced and got a nice prize. After dinner, we said goodbye to all the new friends we had made and headed back home.

In short, the Introduction Weekend was a big success! Besides it just being a fun time with a lot of nice activities, it is also a nice way to meet new people. It is very nice to see some familiar faces when you enter the lecture halls for the first time and maybe you will even make some friends for live. A big thanks to the Introduction Weekend Committee for organizing the weekend and hopefully next year will be as fun as this year!

← Previous: The raven paradox Next: The power of subliminal messages →