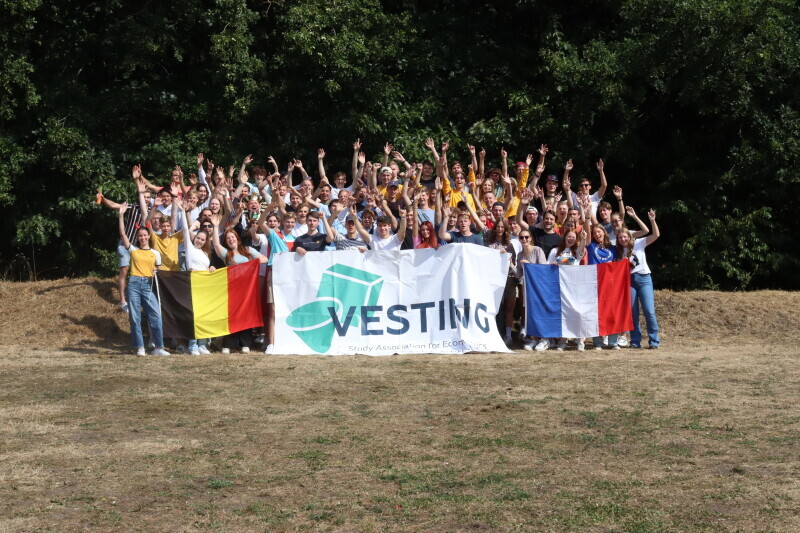 For the first time in two years the VESTING Introduction Weekend could take place without any covid-restrictions, and what a weekend it was! It was in the days before the academic year was set to begin, so high time for the first year econometrics students to get to know each other. Every SPAA group represented a country and wore a delightful matching outfit. The weekend was ready to begin!

After departing from the train station to a camping farm in Drenthe, the first years arrived along with ideal weather conditions. The students began their introduction to each other by playing games like hit-the-newspaper-at-the-right-name and the T-shirt game (though due to a pitiful lack of T shirts the bin bag game would probably have been a more suitable name). Having learnt the first few names of their peers the students were in for more.

During the whole weekend the game ‘Gotcha!’ was played enthusiastically, where you try to let somebody say a particular word, without them noticing. Furthermore, a crazy 82 was organised, in which every group had 82 different challenges to complete, like hugging a tree or building a pyramid of people. After dinner there was a pub quiz (where I myself was gotcha’d within 5 minutes) and afterwards an enjoying party began.

On Saturday the first years were woken up (way too early) starting with some morning gymnastics by the enthusiastic Heleen en Freeke. Then the sublime weather just called for a game of slip-and-slide-wet-sponge-dodgeball. There were more fun games and activities, including sumo wrestling and the infamous obstacle course, and during every spare moment Max Verstappen’s Formula 1 performance was watched closely.

In the afternoon two professors held encouraging speeches about the study programme (also important). Afterwards, the various committees tried their hardest to win over as many first years as possible for their own committee. After a scrumptious pasta pesto it was time for a game of flunkyball. In the evening, an energetic karaoke party was organised where ‘Riptide’ and ‘Noodgeval’ were among the popular choices. And when the neighbours asked to put the music down, the party continued seamlessly into the kitchen.

After a bit more sleep this night it was nearly time to go home. After breakfast the winners of gotcha and the crazy 82 were proclaimed and they received a prize. A lot of the leftover food was sold at the legendary auction, after which the senior members tried their hardest to persuade anybody of taking a loaf of bread with them. At last, it was time to return to Groningen. While waiting on the bus a bit more Formula 1 was watched and others fought against their tiredness.

The weekend ended with a pizza dinner at Napoli on Sunday evening. After this the first years could look back on a weekend of happy memories, during which they were introduced to the lively student life of Groningen, had a lot of fun, but most importantly, they laid the first foundations of their new friendships. This was the main goal of the introduction weekend and I believe this has been achieved with flying colours. Till next year!