Impression of the Introduction Weekend 2019: The VESTING Olympics 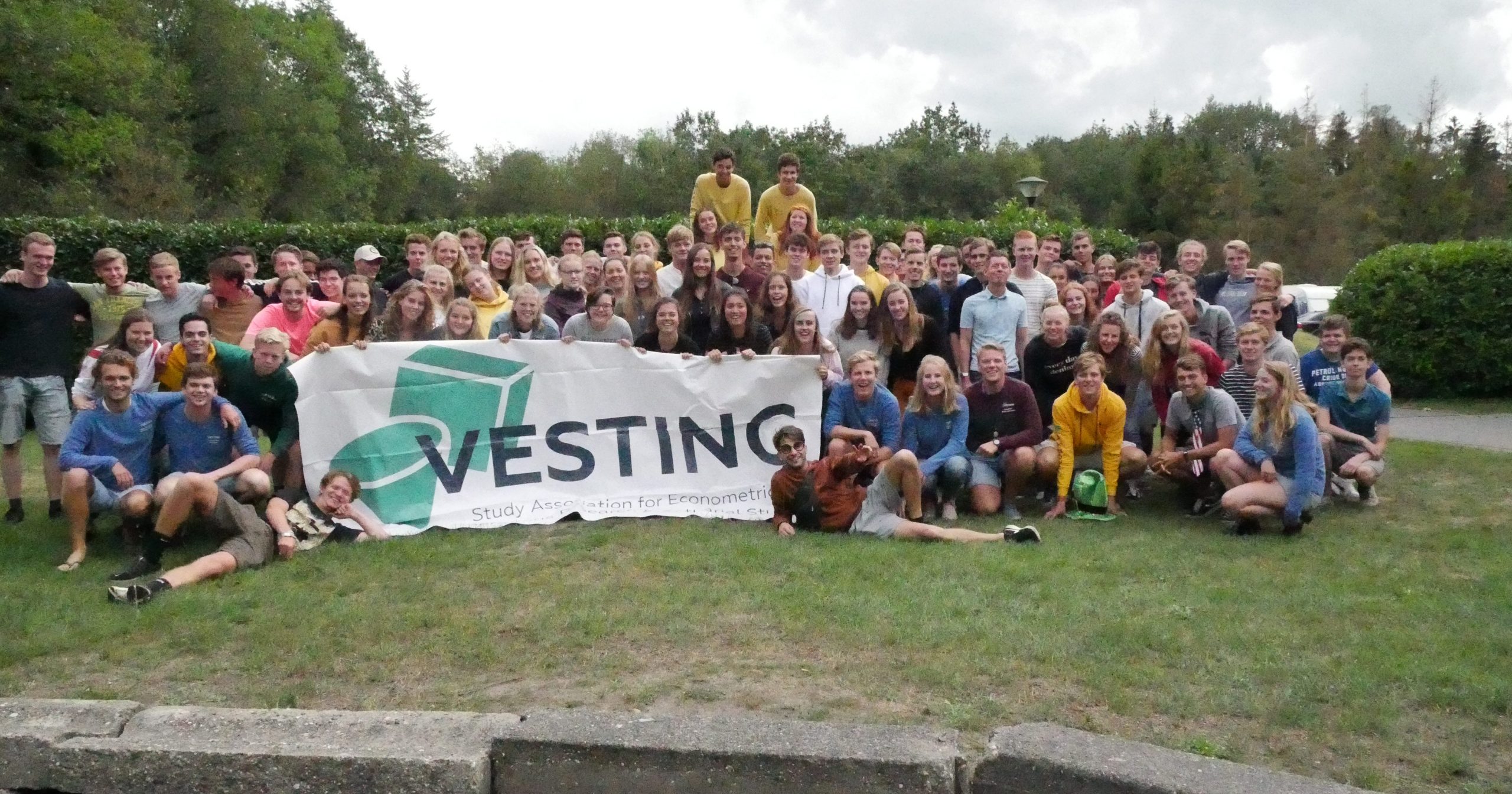 By Danjella Siemonsma
The VESTING Olympics was unlike any other sports event. Usually the participating athletes try to get as much sleep as possible and try to live a healthy lifestyle, at least during the event. At the VESTING Olympics not one person got enough sleep and only a few 17-year-olds and maybe the people who had ‘nuchterheidsdienst’ lived a semi-healthy lifestyle.
It all started Friday 30th of August around 14:00 in front of ‘het Peerd van Ome Loeks’. Many different Introduction Camps had their starting point in front of the main station, so it was a bit of a search to find VESTING among all the other large groups. But I think everyone succeeded. Once you found VESTING you were told your SPAA-group. Everyone got little gifts from their mentors representing the country their SPAA-group was in the VESTING Olympics. Groups got for example orange whistles to represent the Netherlands or headscarves for Saudi Arabia. 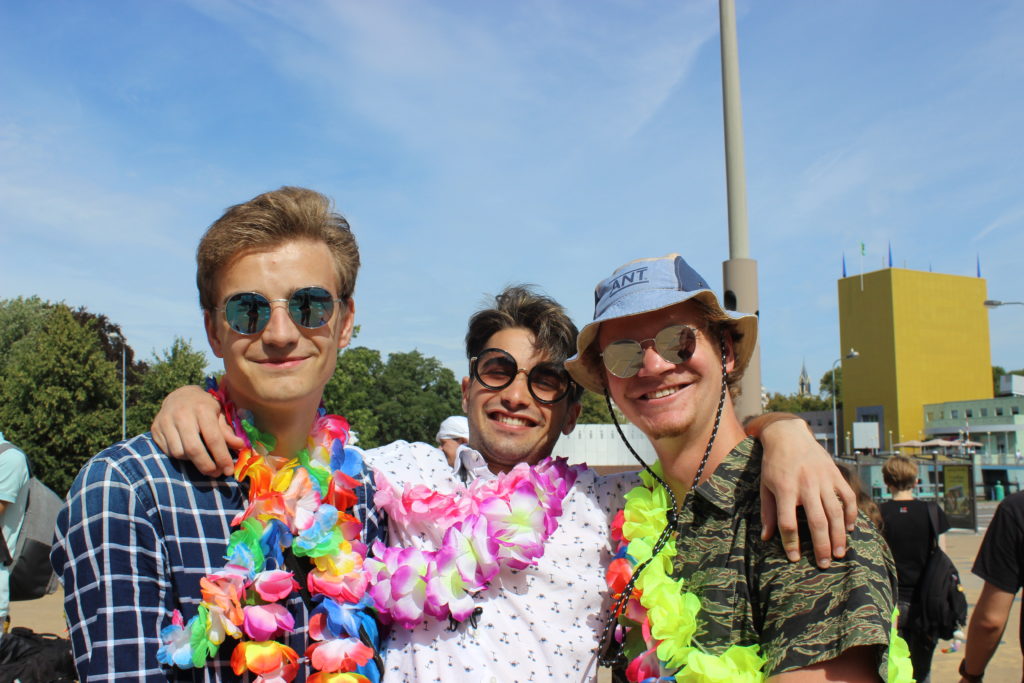 It didn’t take long to get to the camping farm de Riegheide in the middle of nowhere (Drenthe). After arriving we played a short game of ‘over de streep’ in which most notably Axel confessed he doesn’t think he’s going to pass his BSA. Afterwards we played a few name games to try and learn all the names of the people in our SPAA-groups. Then at 17:00h the bar and snack station opened, so it was finally time to really get the party started. But not before we had the amazing wraps that the cooks had prepared for us. We had a bit of downtime during which the first points for the crazy 88 were earned. People were hugging trees, making pyramids and the more dedicated groups took body shots or called their parents to tell them they were quitting EOR. Next to that a game of gotcha was started, so people were trying to ‘kill’ others for that game as well. We had a fun evening activity in which the first points for the VESTING Olympics could be earned by competing in classic dutch games as ‘stoelendans’, ‘limbodansen’ and ‘ballonblazen’. A long night of games, a much needed ‘broodje knakworst’ and getting to know all these new people followed.
Saturday morning was a tough one. After the senior students had their fun waking up the freshmen with pots, pans and lots of shouting, it was time for a lovely work out to get our bodies moving. Even though the megaphone had stopped working, everyone could understand what was going on because of Melanie’s shouting skills. Although it wasn’t all terrible, the workout did teach me a new favourite stretch, the ‘tall – small’. Luckily the workout was over soon and it was time for breakfast.
After breakfast it was time for two presentations. One from Jochem (Chairman of VESTING) and the chairmen of the first year committees about VESTING and becoming an active member within the study association, and another one about our study EOR and life as a student.
Finally, it was time for the main event of IW. It was time for The VESTING Olympics. These Olympics consisted of sumo wrestling, dodgeball, beer pong, earthball, throwing eggs, rope pulling, penalty shooting and a very painful inflatable obstacle course. It was a long afternoon with lots and lots of fun games. If you want to hear stories about this afternoon just ask anyone who’s been to the IW. Everyone had their own favourite game and has their own favourite stories. My personal favourites were dodgeball, which was played on a very slippery surface and earthball, which was just volleyball with a giant inflatable ball. During dinner, which consisted of French Fries and a snack, many SPAA-groups were trying to complete the crazy 88. Later that Saturday night the winners of the VESTING Olympics were announced and another long night of partying followed. 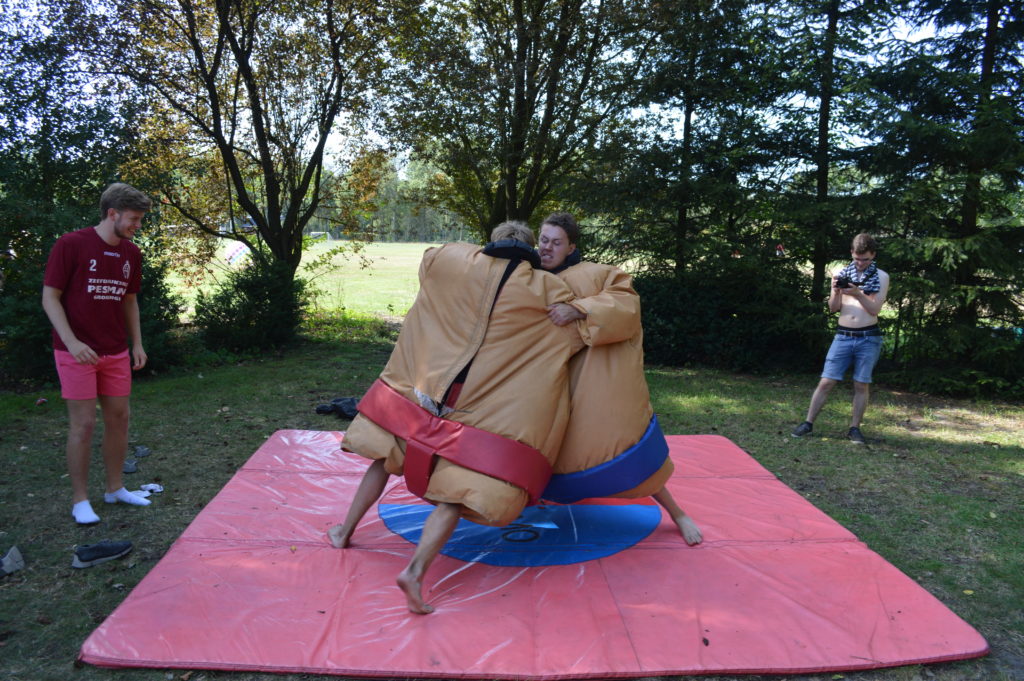 Sunday morning was a bit more relaxed than Saturday. Probably because everyone was tired and/or hungover. We had breakfast, emptied out our rooms, and cleaned up the camp farm. On top of that the winners of the crazy 88 and gotcha were announced. One group almost completely finished the crazy 88, which must have taken a lot of dedication. We still had a lot of time to kill before the tour buses would arrive to take us back. Luckily we had many packs of cards to play games with and we played the game ‘blauwtje lopen’. After this it was time for the auction. This auction ended up raising around €400,- for charity. It raised this much money because of the quality of the products sold obviously. Lots and lots of bread, 2 kg of cheese and many bottles of wine. But the most unique item of this auction has to be the liter of custard (‘ pak vla’) that Jochem had to drink in one go. After the auction it was time to go back to Groningen. For the people who were not in the mood to cook, or for the people who wanted to spent some more time with this amazing IW-group, there was a nice dinner at Napoli Sunday evening. It was a good end to a perfect weekend.
I’d like to thank this year’s IWC, the cooks, the MMC, the mentors and VESTING for the great time I had during this Introduction Weekend.

← Previous: Can econometrics save lives at sea? Next: De vriendschap paradox →