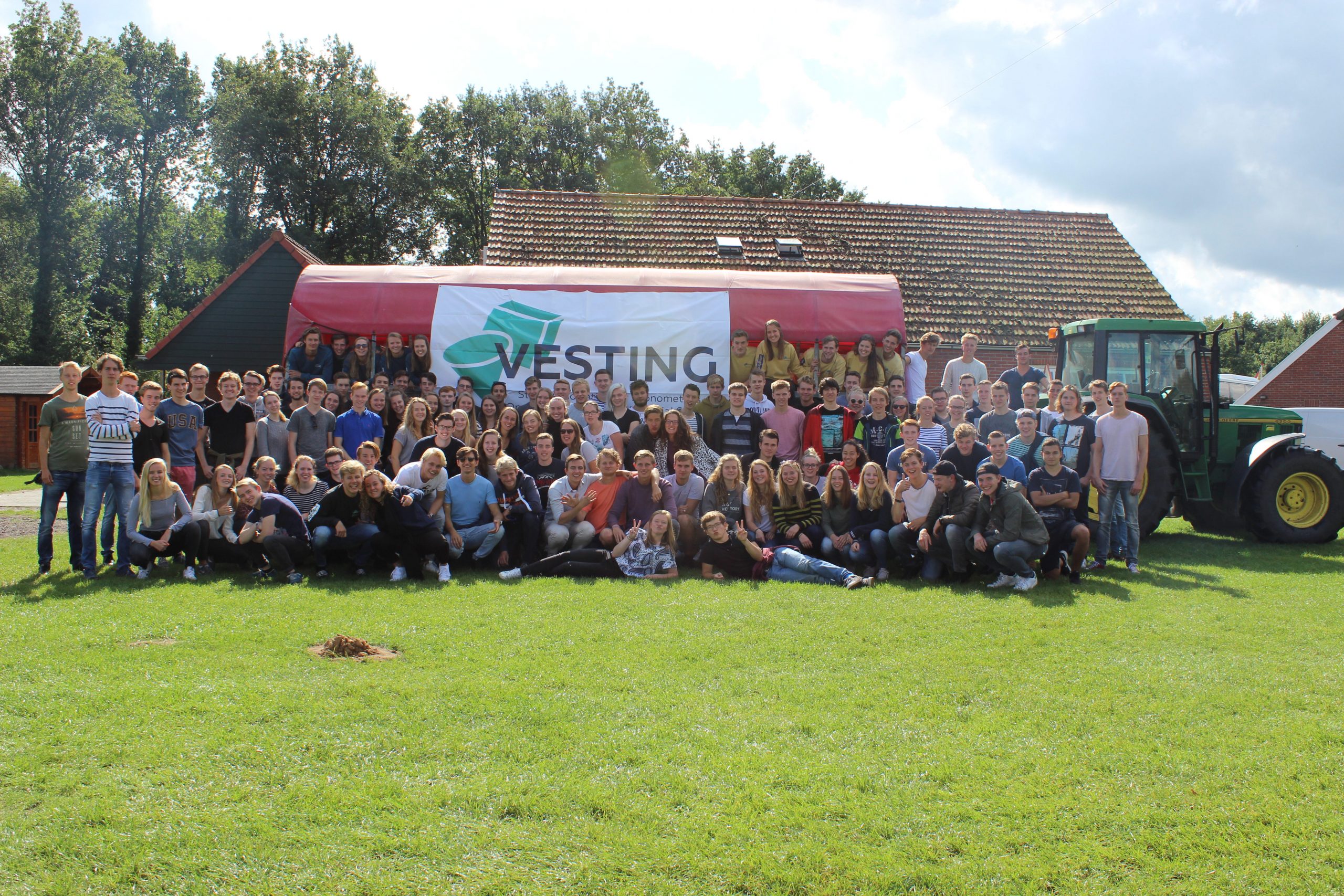 On September 1st, 2017 11:45 AM in Groningen an (unusually) large group of eager VESTING Freshmen gathered at the train station in front of ‘het Peerd van Ome Loeks’. Some more awake (or hungover) than others, but all ready for a VESTING Introduction Weekend that would go down in history as unforgettable. A quick bus ride through the scenic provinces Groningen and Drenthe took the group to the quaint ‘kampeerboerderij’ Tweehek in Westdorp.
Upon arrival the newly established Vikings, Dino’s, Cavemen, Romans, and Cowboys got to know each other while enjoying a picnic lunch in the grass and, contradicting all weather forecasts, the sun. Once they thought they had mastered everyone’s name (but let’s be honest, Lotte was the one and only name-genius) it was time for the first challenges from the Crazy 88 list. Through push-ups, tree-hugging, shoe-size comparing, fly-photographing, cucumber-gifting and VESTING Nail painting ‘The Golden Century’ rapidly took their first strides towards their first place. The Indians, on the other hand, could care less about the competition. According to Femke, however, they scored many more ‘gezelligheid’ points during tick-tack-toe, newspaper-hitting, and ‘over-the-line’.
Crazy 88 was not the only historical VESTING Game introduced to the up-and-coming econometricians. To speed up the socializing process the famous Gotcha envelopes were distributed. While Thom didn’t even have to make an effort, with Sjoerd openly talking about his beloved ‘DENZ’ committee, Nigel struggled having Krijn describe his ‘gifts’, despite his 18th birthday celebrations that weekend.
At exactly 5:00 PM the ‘buis’ alarm went off. In most situations people assemble outside for an alarm, but this alarm appeared to have a different effect. The quickest freshmen rushed inside for their first beer and some snacks from the renowned Fifty-Cent Shop, leaving their fellow group members helplessly bouncing on the large cushion. Soon after, a delicious pasta salad provided a layer on which the rest of the evenings beers (or Fanta for Maarten) could rest and an intense game of ‘Ik hou van Holland’ could be played.
Saturday morning the students were introduced to a less appreciated alarm: pots and pans at 8:30 AM. The aerobics session was met with limited enthusiasm too, no matter how loud and fast the AC and SC tried to hype up the crowd. Breakfast, on the other hand, was devoured with a passion lacking previously. Where ‘AC HOOG, SC LAAG’ and vice-versa left the VESTING Firstyears cold during the early morning hours, the talks about the different VESTING Committees seemed to create a big stir, with students scrambling towards the sign-up sheets. Another highlight of that morning was Pim Heijnen’s ‘advice’ (seen by many older VESTING Members as a joke) to really spend 40 hours a week on studying… this clearly left an impression on the sunbathing/sleeping freshmen he had before him.
The afternoon was filled with various (water) activities, ranging from bellygliding between beer crates (‘levend sjoelen’), a blow-up obstacle course, and a very slippery version of rounders, alternated with sjoelen, Chinese Whisperers, and some math (which had many worried about the upcoming year for a split-second). The energy levels had fortunately returned at this point with things getting heated and competitive between the batting team and the field team multiple times; wild running and elegant flopping on the obstacle course; and simultaneous points being scored during ‘levend sjoelen’.
In the evening, it was time to recover from another memorable day while relishing in kroketten, frikadellen, kaassoufflés, and fries. The ketchup and mayonaise bottles left many amusing drawings and words on the table covered in foil. For those who still hadn’t gotten their bodies back to normal temperature with a shower, there was a warm campfire and lovely company. Later on, the beer pong room was reinstated and card games were back on the table to commence a promising night that went on into the wee hours. If anyone ever wondered what time it was that evening, there was luckily always Patrick to tell us: “time for a ‘riet adt’!”.
Sunday morning the freshmen awoke from a longer sleep-in for the final day of the Introduction Weekend. Patrick and Thom woke up with a mysterious pan in their bed, thankfully unused. After breakfast, it was already time to pack the bags again and get ready for the iconic group picture. In true Econometrics-style the afternoon was filled with the VESTING Veiling, where mentors tried to Ice each other one last time with mystery-boxes between all the bread, hagelslag, and dessert. After everyone worked on their tans a little longer the buses drove back to Groningen.
Freshmen who didn’t feel like cooking or could not accept that the weekend had finally come to an end made their way to Pizzeria Napoli for a pizza or pasta with their new-found friends. There they toasted to many more VESTING Events and to making even more history together!

This article is written by Alieke Engel.